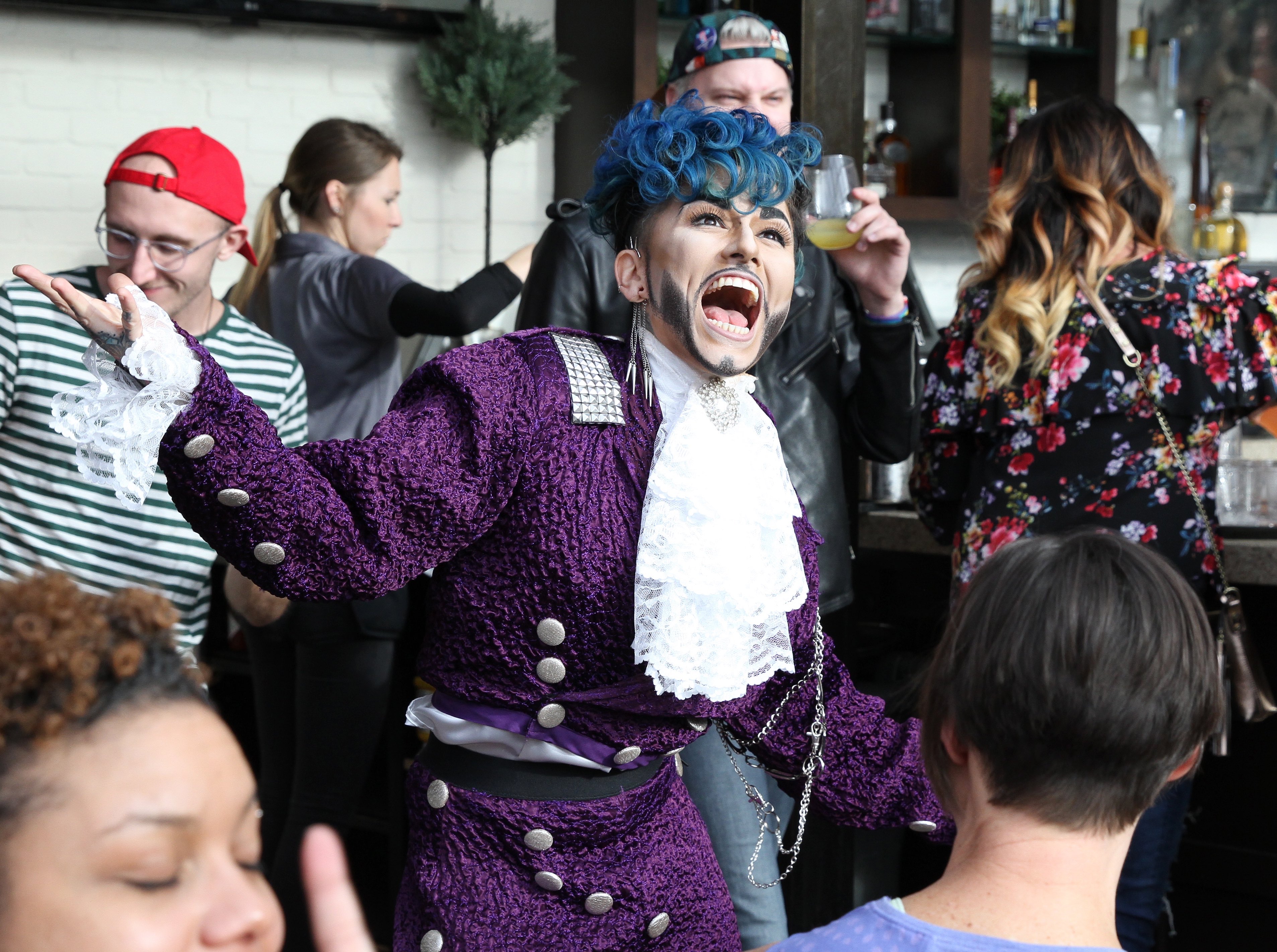 Twin Cities audiences are embracing the once-underground art of drag

It’s winter in Minneapolis and a purple-clad Prince is hip thrusting in front of a packed crowd, heating up a sold-out downtown show.

But this isn’t a scene from years past. It’s a Saturday afternoon drag show at Union Bar & Grill on Hennepin Avenue, and Damien D’Luxe — standing the same 5-foot-3-inch height as the late local legend — is performing “Let’s Go Crazy” for 160 or so diners, many with dollar bills waving in their hands.

The performer, the drag king persona of Emi Nijiya, has been entertaining audiences across the Twin Cities for the past 15 years and said more and more are coming to the community. As drag finds a more mainstream audience, these performances are drawing in a new generation of fans from both inside and outside the LGBT community.

“It was Edina moms,” Nijiya said recalling the January audience. “They were fantastic. Some even dressed up for the occasion. It was nice because a lot of the time the straight community doesn’t normally know what to do with drag kings.”

Chad Kampe is one of the non-performers responsible for bringing drag shows like this to straight venues. The Kingfield resident is the founder of Flip Phone, a throwback-themed, LGBT-friendly dance party that pops up throughout the Twin Cities. Kampe started the event series five years ago with a Wednesday night party at Honey, a basement venue located just across Hennepin Avenue Bridge from downtown. It has since spawned weekly shows that can draw thousands to mainstream venues like First Avenue, the North Loop’s Muse Event Center and even Memory Lanes to see drag queens. And dance.

“I felt like Minneapolis was looking for queer events that weren’t at the three or four gay bars that everyone goes to, so it was always an intention of Flip Phone to bring queer experiences to different places,” he said.

Kampe is one of the city’s ambassadors to the national drag scene. Flip Phone invites in popular contestants from “RuPaul’s Drag Race,” which many in the community credit for bringing drag outside gay venues and into homes nationwide. The reality competition, which has enjoyed nine seasons so far and inspired two spin-off shows, recently made the jump to VH1 from LGBT network Logo.

Kampe said the Twin Cities are ahead of major cities across the country, which he said is experiencing a “drag renaissance.”

“Five years ago, there were not nearly as many drag performers as there are now,” he said.

The audience has followed suit. Flip Phone’s weekly brunches at Union sell out a month in advance. While Flip Phone’s main audience is LGBT people, Kampe said the events are a hit with women and young adults who are willing to pay to watch drag queens.

Last November, a benefit show with “Drag Race” alum and local queens raised $80,000 for Puerto Rico relief. The event was even streamed on Billboard’s Facebook page.

“I think that was a crucial moment to really show that Minneapolis drag is here to stay,” Kampe said.

A century ago Twin Cities audiences watched male and female impersonators, vaudeville performers who enjoyed fame as traveling theater acts. It wasn’t until the ’30s and ’40s that the art became taboo and went underground, said Stewart Van Cleve, a digital archivist with Augsburg University and author of “Land of 10,000 Loves: A History of Queer Minnesota.”

Back then, before entertainers called themselves queens or kings, drag wasn’t nearly as visible as it is now and was actually illegal. Referencing a newspaper clipping from the 1940s, Van Cleve said four local female impersonators were charged with disorderly conduct, fined and had their names and addresses printed in the paper.

“The stakes were really high. If you got caught, you were pretty much guaranteed to lose your job,” he said.

Drag became more visible in the 1960s and 1970s with Twin Cities venues like the jazz club Roaring ’20s and the Sandbox Bar. Gay House, one of the country’s first gay and lesbian community centers, created the infrastructure to help launch the Twin Cities Pride Parade and the local gay rights campaign. At the forefront were drag performers who put on radical displays of gay pride.

“They were the ones who were really violating gender norms, as well as sexual norms,” Van Cleve said.

Downtown’s Gay 90s became the epicenter of drag in the Twin Cities. During the AIDS crisis in the 1980s, Van Cleve said drag rose to a high art form as local performers headlined fundraisers at the bar to support gay men dying of HIV/AIDS.

With a drag superstar like RuPaul Charles rising to popularity in recent decades, more and more venues are hosting shows, from Go Tuck Yourself at the Saloon to national touring acts.

A haven for drag

Novak, who goes by the stage name Nocturna Lee Mission, is one of a few drag performers who have joined a full-time cast. The local queen performs each Saturday as part of the 10-person Drag Revolution team at Lush in Northeast Minneapolis.

While he still works another job to cover his living expenses, being part of a cast allows Novak to make money doing drag, which involves expensive makeup, wigs and fashion on top of hours of work spent getting into character, working on choreography and tailoring outfits.

“It’s a very expensive art form. People really have to have a lot of love of what they’re doing,” Novak said. “(Audiences) see a performer for three minutes, but the performer could’ve put in 20-plus hours of work just for those three minutes on stage.”

Brian Johnston, the bar’s general manager, said when he and his partners took over Lush three years ago they put in an event center, new lighting and a sound system so they could host regular shows. Hiring performers allows Lush to put money into the LGBT community, he added.

“The performers and entertainers work around the clock to raise money and do things for charity, he said. “They’re family to all of us, too. It’s crazy, this little thing we’ve built here.”

Nijiya, the cast’s only drag king, said the performers support one another, despite being in a community that can oftentimes feel competitive.

“They’ve been there for me through deaths. I’ve been hospitalized. They were in my wedding,” they said.

With the growth of the bar’s program, Lush has expanded its offerings with a monthly event that’s tailored to the scene’s youngest fans, many of who likely grew up watching “Drag Race.” An all-ages drag brunch allows families to bring their children to see the cast perform a G-rated version of their acts.

Nijiya, who started performing even before they were old enough to be in a bar, said they had young people come up to them saying they didn’t know it was possible to become a drag king.

“It’s really a beautiful thing that they’re able to allow access for kids,” they said.

Tygra Slarii, a transgender performer who describes herself as a showgirl with a “Beyonce-meets-Ciara” style, started entertaining at an open drag show six years ago.

“They kind of just pushed me out,” she said.

The Arizona native, who was won pageant titles like Miss Gay Iowa USofA Newcomer 2017, said with the rise of “Drag Race,” local queens have grown up wanting to be on the show and, even if they don’t wish to compete, they’ve benefitted from a new generation of fans. Despite being far from drag hotspots on the coasts, she said the Twin Cities scene has grown with all kinds of performers, from bearded drag queens to artists who primarily post their looks to online outlets like Instagram. Some women are becoming faux queens and trying their hand at the exaggerated drag style.

“This scene is just about growth,” she said. “We’re a melting pot of the different types of looks here.”

Whether fans become performers themselves or just want to tip a dollar or two, drag performers say everyone can enjoy good times at a show.

Kampe said his events offer people who are looking to escape the current political climate a dose of “pure joy and pure happiness.”

“Everybody leaving walks out with gigantic smiles,” he said. “You can’t leave sour.”