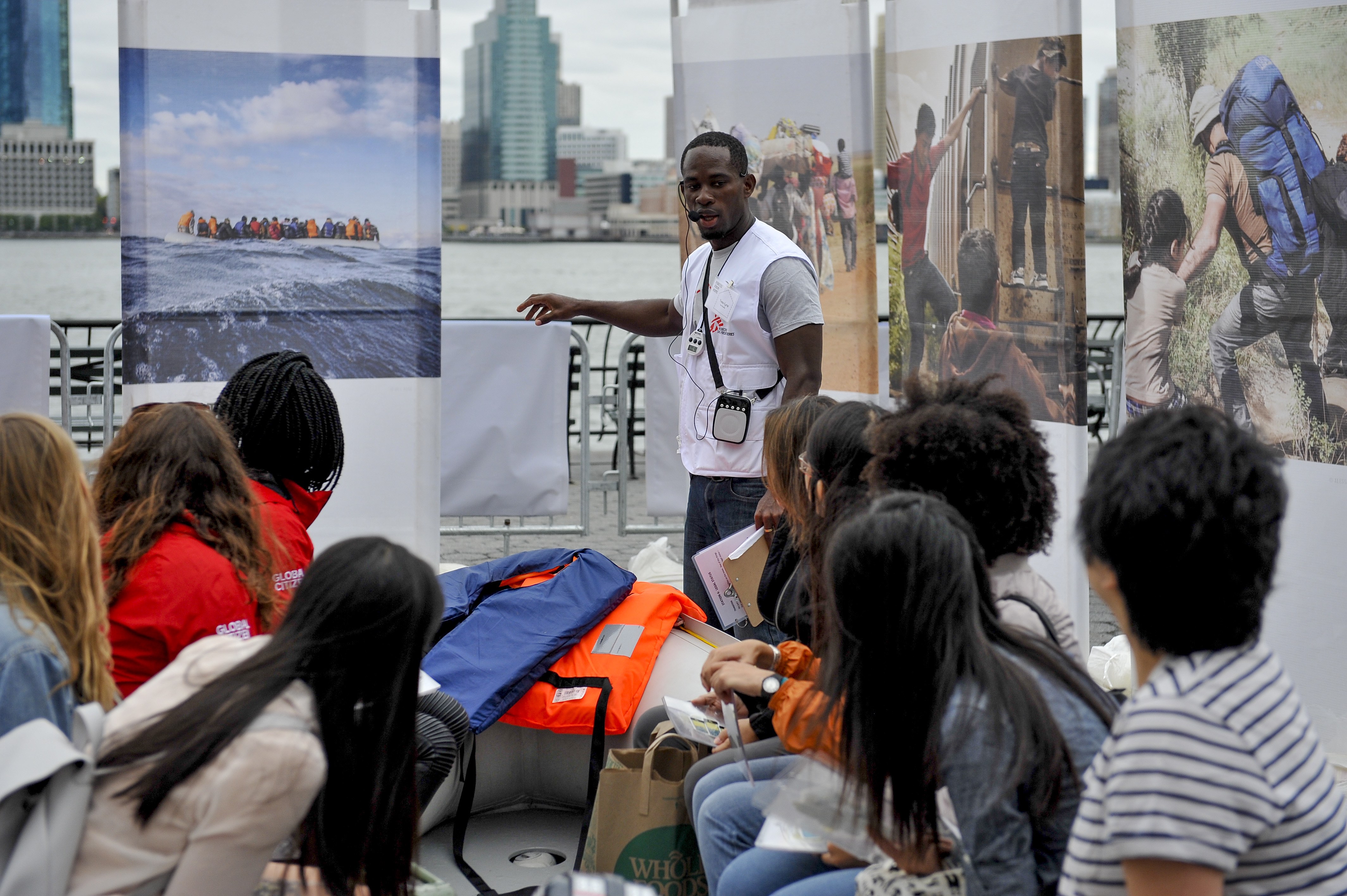 A Doctors Without Borders volunteer walks participants through a 2016 installation of “Forced From Home” in New York. Photo by Elias Williams

An immersive experience from Doctors Without Borders comes to the Commons Sept. 9–16

A Doctors Without Borders exhibition coming to Minneapolis seeks to shed light on the experience of the planet’s growing population of refugees, what organizers describe as a global crisis.

Using a mix of virtual reality technology, live demonstrations with volunteers and a 10,000-square-foot installation, “Forced From Home” is designed as an immersion into the lives of displaced people across the globe. The nationally touring installation from Doctors Without Borders, or Medecins Sans Frontieres (MSF), will take over a block of downtown’s Commons park near U.S. Bank Stadium Sept. 9–16.

More than a decade ago, the international medical humanitarian organization put on a similar exhibition when the world’s displaced population totaled 33 million. Since then, that number has risen to 68.5 million, including 25.4 million refugees, but MSF organizers say statistics alone don’t tell the complete story.

“We hear the statistics almost ad nauseum,” Communications Director Michael Goldfarb said. “We really felt like it was imperative to put faces to these numbers, to draw emotional connections — a relatable connection — between visitor and refugee.”

MSF volunteers, including many who have worked with refugees, walk participants through what they’ve witnessed out in the field. Participants get to experience the living conditions and transportation of displaced people. Some pieces are taken directly from the field.

Assisted by virtual reality headsets, viewers watch several 360-degree videos inside a dome structure that detail people’s journeys from Honduras, Lebanon, Syria, Afghanistan, Tanzania and Bangladesh. Participants get their own identification card and have just a few minutes to choose what items to take with them in order to simulate their own displacement. The experience is free and takes about an hour.

Joseph Keenan, a lung and intensive care doctor with the University of Minnesota Medical Center, has been on several Doctors Without Borders tours, which have brought him to South Sudan and Ethiopia where Sudanese refugees are escaping conflict in their home country.

Keenan said while the exhibition isn’t meant to recreate the experiences of refugees, it will immerse people in the kinds of choices and lack of control that many displaced people face.

“There’s a lot there that makes me pretty impressed, (and that will) give people their own personal sense of it. It certainly doesn’t just sound like a poster in a movie,” he said.

This is the third year MSF has toured “Forced From Home” in metro areas across the country, but it’s the first opportunity Twin Cities residents have had to participate in the exhibition.

Goldfarb said it is especially timely considering the growing polarization around immigration, especially refugees. Though organizers say “Forced From Home” isn’t a lobbying effort for certain policies, MSF USA Executive Director Jason Cone said in a statement that leaders in the United States and European countries have “abandoned their moral and humanitarian responsibilities” with policies that criminalize asylum seekers and those seeking safety.

“This is not a black and white issue. It is shades of gray and it involves people just like us, fathers, mothers, school children, grandparents — many people with lives similar to us. That’s the impact we’re trying to make,” Goldfarb said.

MSF then connects participants with resources on how to get involved in their own communities in order to support refugees.

“Forced From Home” will wind through the smaller west block of the Commons. Amanda Wigen, the park’s director of programming and events, said some of the issues raised by the exhibit will overlap with “Carry On Homes,” a pavilion and art piece that features documentary photography of immigrants in Minnesota. The piece, the winner of this year’s Creative City Challenge, has been on display in the park since the spring.

“I think, too, that the (‘Forced From Home’) content is very special and something we’re glad to highlight and we’re glad they’re bringing to the area,” she said. “We’re excited to have that pairing on the west block.”

Keenan said the centrally located site and its exposure to the elements are ideal for “Forced From Home.”

“It’s a lot more meaningful when it’s outdoors because it takes some of that control away,” he said.

Organizers say at the heart of the exhibition is a mission to bring humanity back into the conversation on refugees and immigration.

“This is a unique opportunity to gain a more granular, nuanced understanding of what refugees go through,” Goldfarb said.