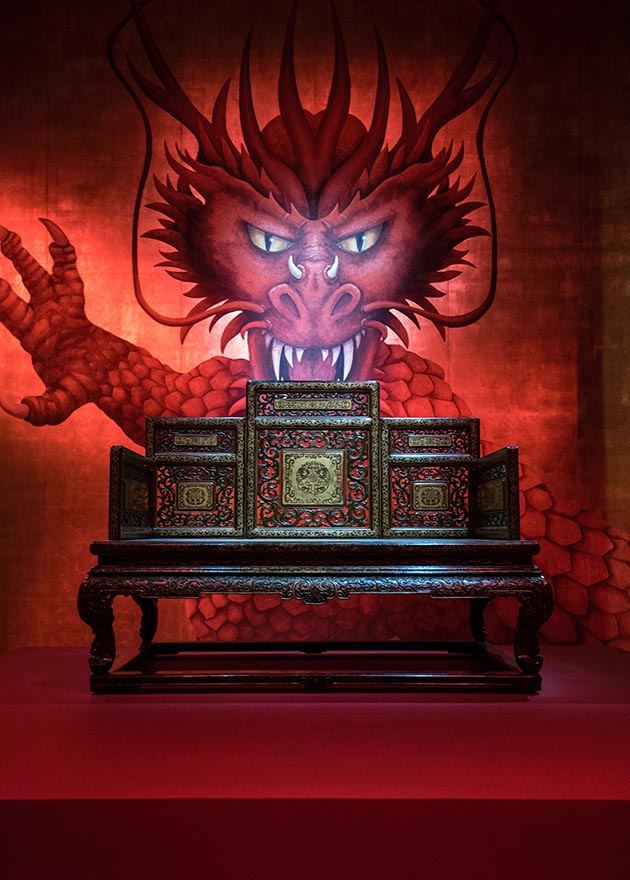 Spoiler alert: When you exit “Power and Beauty in China’s Last Dynasty,” a smiling Minneapolis Institute of Art employee will hand you a pamphlet explaining what it was you just saw.

The dramatically staged displays of Qing dynasty textiles, decorative objects and religious paintings and sculptures from Mia’s collection of Chinese art are unaccompanied by the didactic wall labels found throughout the rest of the museum. Designed by theater and visual artist Robert Wilson, “Power and Beauty” emphasizes spectacle over scholarship.

Or, at the very least, it puts spectacle before scholarship. Wilson stages five of the imperial garments under lights that dim and then suddenly grow in intensity — the better to spark the sheen of the elaborate silk embroidery. But he also purposely obscures some pieces, including a pale jadeite vase found in the final room before the exit. Its intricate details are difficult to make out because Wilson has placed it behind a semi-transparent scrim.

And if you wonder who held that vase or who wore that robe, well, just wait. The answers to your questions might be in that pamphlet.

“The most important thing for me is experience,” Wilson told a small group of reporters a few days before the opening, and with “Power and Beauty” he makes a direct appeal to the senses.

The exhibition progresses through 10 separate rooms, beginning in near total darkness and ending in a room bathed in white light. Gallery-goers’ shoes tread on steel and mud. The soundtrack shifts, videogame-like, with the environment; Wilson described it as an “aural map.”

Wilson even promised to enhance the experience with different smells, although — except for the dry-grass odor in one room with thatch-covered walls — they weren’t easy to detect on a recent visit. (One imagines the prohibition on food and drink in the galleries was the only thing stopping Wilson from engaging our sense of taste.)

Celebrated for his experimental work in the theater, including the landmark opera “Einstein on the Beach” with composer Philip Glass, Wilson was selected to collaborate with Mia’s curator of Chinese art, Liu Yang, on what is the museum’s first major exhibition of its imperial Chinese textile collection since 1991. Yang and Mia Deputy Director Matthew Welch traveled in August to the Watermill Center, Wilson’s Long Island arts laboratory, where Wilson — a noted collector of Asian art — selected the pieces for the exhibition and sketched out a design.

“We’re used to planning exhibitions more than five years in advance,” Welch said. “This has been six months.”

Wilson said his approach to designing museum exhibitions is to “try to think about it quickly,” and in this case he seized on the number 2, his conceptual shorthand for duality, for two things that complement each other or contrast or do both at the same time. Reflecting the Chinese philosophy of yin and yang, the exhibition is designed around counterpoint: light against darkness, dusty thatch against shining Mylar and minimalism against maximalism.

“It’s not just taking any opposite and putting it together but to find the right opposite, the way you put a rock on a computer,” he said. (In terms of pure theater, Wilson’s press conference, a free-ranging lecture on architecture, opera and exhibition design, during which he quoted Susan Sontag, Louis Kahn and Baudelaire from memory, may have upstaged the exhibition.)

That dark room that opens “Power and Beauty” — where the only object on display is a dimly illuminated black porcelain vase, and the soundtrack is an ascending keyboard line punctuated by the tinkling of a dropped chopstick — is immediately followed by a wave of color and sound. The next room’s central display case is filled with dozens of items — red lacquer boxes, sculpted jade and coral, bronze urns, blue and white porcelain — that hint at the palette of colors found in the royal garments in the next room. Now the sound coming through the overhead speakers sounds like a Mark Mothersbaugh composition for a cartoon show, a jaunty collage of whip cracks, laser zaps, whistles and barnyard bleatings.

That room is also one of the places where the lack of explanatory material is most noticeable. What is this stuff, other than the paraphernalia of an imperial court? What did it do? What did it mean?

Wilson implores the viewer to stand in the presence of these objects and simply take them as they are. And where Wilson’s counterpoint is sharpest, it makes it possible to see even familiar objects in a new way — as with a grouping of weathered Buddhist stone sculptures, including a menacing guardian figure known as a Dvarapala, that Wilson contrasts against a gallery space lined with polished metal.

But three very similar-looking Daoist paintings on silk, hung side-by-side in a mud-walled gallery meant to evoke a mountain retreat, were simply puzzling. Even the pamphlet didn’t help much.

That mystery is part of the experience Wilson has designed, and even puzzlement is a kind of engagement with the material. “Power and Beauty” is an experience, one that provokes new ways of seeing in part by tossing away the template for this type of exhibition.

Wilson’s theatrical approach can even be genuinely startling at moments, but to explain how might spoil the surprise.