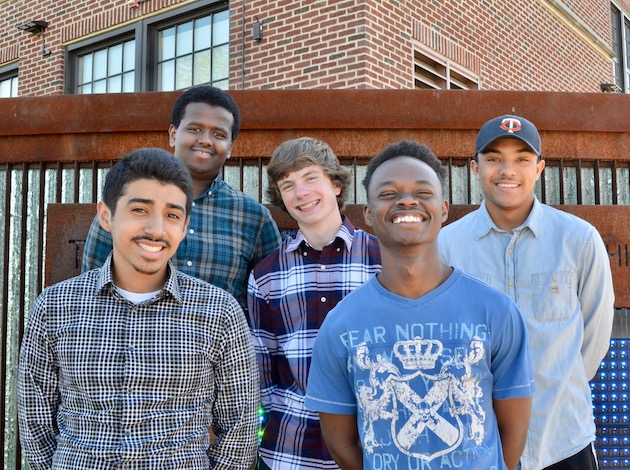 A team of Edison High School students has created an online rewards platform with the goal of increasing student motivation.

Edison’s Junior Achievement business team created the web-based Vanguard Rewards Program to increase student engagement. The team of five sold the system to Edison for $1,000, and several team members plan on helping the school implement the program next school year.

“The whole basis of the program was to reward students in a positive way,” said 10th-grader Brandon Arneson. “… This is more than a product. It creates long-lasting impacts.”

The program allows staff to reward students who speak up in class, demonstrate leadership or, more generally, go beyond what’s required of them. The students can then use the points they earn to purchase rewards.

Staff can also take away “merits” from students for major disciplinary reasons, such as a suspension. The idea is that students need to maintain a certain number of “merits” to attend school events.

The process of creating the program began earlier this school year. The team wanted to use technology to address what they perceived as a lack of student motivation at the school, which led them to brainstorm the online-points system.

It wasn’t easy to create, however. None of the boys had experience building or designing a website, for one, and they also had to navigate the challenges of security associated with school information.

The boys teamed with two information technology professionals who are Edison alumni to design the platform. They surveyed Edison students and staff, tested the product with a few teachers and presented it to the Edison site council, a local entrepreneur and Minneapolis Public Schools Superintendent Ed Graff.

“We wanted a tool that would help teachers get students engaged,” 11th-grader Therence Niyonkuru said.

The team presented the product at the Junior Achievement Company of the Year competition in April, where it finished third out of six teams.

Team members said the experience taught them skills such as teamwork and gave them valuable experience in running a business. Arneson, who wants to become an entrepreneur, said it helped him define what he wants in the future. Twelfth-grader Raul Lazcano Gonzalez, who plans on majoring in international business at the University of St. Thomas, said it gave them hands-on experience in how a business runs.

Company president Max Barnard, a 12th-grader who plans on studying business/entrepreneurship in college, said he learned how to overcome obstacles.

“Every time we hit a wall, we were able to pivot and keep moving forward,” he said. “Everybody was so focused. Everybody was on the same page, and it was just really rewarding.”