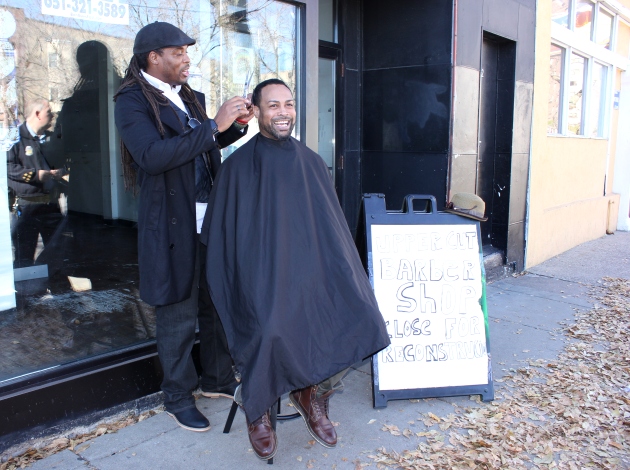 Monell “Locks” Castellan set up a barber chair on the Nicollet Avenue sidewalk outside his empty Upper Cuts Barber Shop with a sign: Closed for reconstruction.

After 17 years in business, Upper Cuts and other storefronts on half of the 1400 block will be demolished to make way for 232 apartments and ground-floor retail. But Castellan considers himself lucky. He’s still operating a second location at 116 W. Lake St., and he’s talking to the developer about leasing a space when the new project opens in the spring of 2020. He wants to open a barber school to give back to the community, a place for kids to cut hair and learn professional skills, “not as a hustle, as a career.” 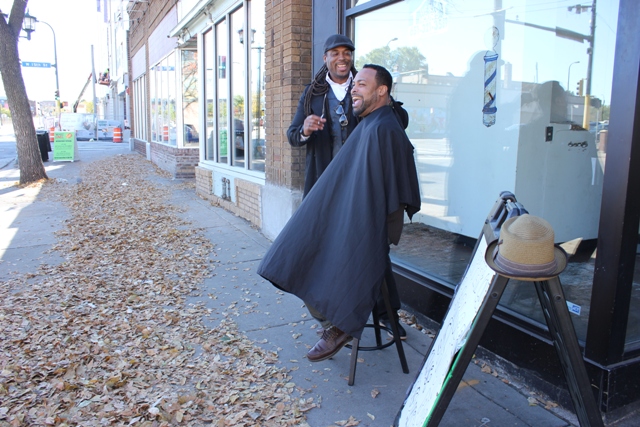 Reuter Walton Companies co-founder Nick Walton said he’s also talking to Market Bar-B-Que and Salsa a la Salsa about returning to the block, although no leases are signed for the five retail bays.

“We always wanted smaller, local, entrepreneurial retailers, and as many of the existing as possible, to be in the new building,” he said.

“I’m fortunate the developer worked it out with me,” Castellan said, thinking of other businesses that won’t be coming back. “…They’ve got to start from scratch, and they’ve been there as long as me.”

As part of the Minneapolis 2040 long-range plan for the city, staff members said they heard one issue from the business community come through loudest:

“Probably the No. 1 thing I heard was concerns about displacement of businesses because of development, because of rising rents, because of the lack of ownership of buildings,” said Heather Worthington, the city’s director of long-range planning. “And it’s a real concern in the business community right now.”

The owner of Ryan’s Pub moved back to Belfast, Castellan said. (The owner could not be reached for comment.) Red Eye Theater will spend the next year finding a new space, although co-founder Steve Busa said affordable spaces are hard to come by. Salsa a la Salsa continues to operate daily at the Midtown Global Market, stating on its website that “change is always a good thing and with it comes new opportunities.” Market Bar-B-Que is opening a new location at 220 Lowry Ave. NE, and the owner is considering a satellite location in the new development. Asian Taste closed, and the owner could not be reached for comment.

First Choice Child Care is down to one location in the Phillips neighborhood, and it’s building a second in North Minneapolis. Operator Nasro Abshir said that when the daycare closed, some of their families lost jobs because they couldn’t find alternate child care. She said the block encompassed successful businesses owned by women, immigrants and people of color, groups that city officials often say they support.

“We all want Minneapolis to improve, but it seems like in order for that to happen, we have to leave,” she said.

A portion of nearby Stevens Square gentrified between 2000-2015, while Loring Park did not gentrify, according to the University of Minnesota’s Center for Urban & Regional Affairs (CURA), which documented Stevens Square increases in median home value and residents with bachelor’s degrees.

Gentrification is associated with both business retention and business disruption, according to research by Rachel Meltzer published in 2016 by the U.S. Department of Housing and Urban Development. Her study of New York City found that displacement is not more common in gentrifying neighborhoods, but when it happens, spaces sit empty longer, and they’re more likely to attract chains.

In the CURA study, people in South Minneapolis repeatedly expressed fears of “Uptowning” their neighborhoods, exchanging small eclectic stores for bigger chains. The Uptown trade area’s average rent is nearly $2 more per square foot than the citywide average, according to a 2016 Perkins + Will retail study, with a concentration of 160 full-service restaurants second only to downtown.

The developer of 1400 Nicollet, Nick Walton, said he’s trying to set rents for both housing and retail as low as possible. Most apartment rents would be $1,100-$1,850 per month, he said. Commercial rents would be $18.50 per square foot net, he said, with generous tenant improvement allowances to help build out the spaces. He said that’s more than or close to what the businesses paid before, but it’s half the typical market rate for space in a new project. The worst outcome would be empty retail space, he said.

“You have to be able to charge enough in the housing above to help offset the rent in the retail below,” he said.

Walton said it’s great urban design to include retail, but it’s difficult to do based on pricing, location and available retailers. The new project couldn’t accommodate the size of the former daycare or theater. He said the largest and best tenant he’s ever signed was Target in Uptown, but there aren’t many tenants like it.

“It’s much simpler to have housing units than it is to have retail,” he said.

In approving the development project last summer, planning commissioners said there was nothing they could do for the businesses.

“We don’t look at affordability. We don’t look at displacement, and that’s missing,” said Council Member Jeremy Schroeder. “If the city is serious about its equity goals we need to make sure that’s applied in absolutely every single part.”

Planning Commissioner Alissa Luepke-Pier encouraged residents to talk to policymakers about the issue.

“We believe these small businesses that helped revitalize Eat Street deserve better than to be excluded from this development,” wrote Gary Simpson, board president.

Lowry Hill resident Janne Flisrand, who often speaks in favor of more housing and density, told the city that displacing business owners of color would exacerbate the city’s racial disparities. The new project should duplicate the block’s retail square footage and offer first options to existing businesses at comparable rents, she said.

Castellan said he unsuccessfully lobbied his neighbors to buy their pieces of the property around nine years ago.

“Look what happened. We got pushed out,” he said.

On the Nicollet Avenue sidewalk, Castellan talked with Brian Moore, one of the barbers temporarily out of work. Now Moore is home with the kids while his wife goes back to work, and he’s headed to school in preparation for barber school licensing.

“[Castellan is] one of those business people who is accepting of everybody, and gave everybody a chance,” he said. “This was the chance I needed. … He gave me the opportunity to work and to eat. He helped me build my life in Minnesota.” 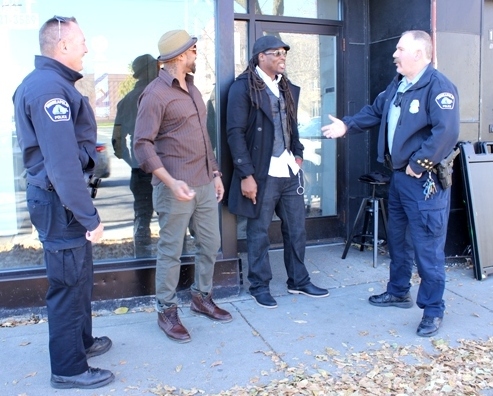 He and Castellan greeted customers like Gary Gass and joked with Officers Steve Kingdon and Greg Kosch.

“Did you buy the block?” asked one passerby.

“Not yet,” Castellan said.