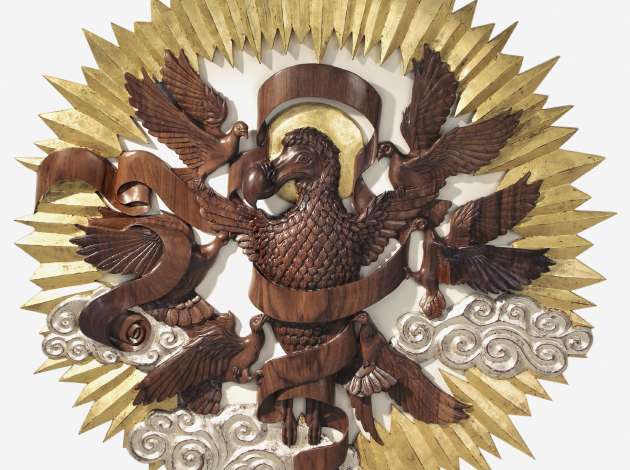 “Flight of the Dodo,” one of several Laurel Roth Hope artworks in the show that based on extinct bird species. Credit: Submitted image

“State of the Art” travels from Arkansas’ Crystal Bridges to Mia

It wasn’t Boise but 1,300 miles east in soggy, fast-thawing Minneapolis where Khare found herself in mid-February, a guest for the opening of “State of the Art: Discovering American Art Now” at the Minneapolis Institute of Arts. She is one of about 100 artists, most of them not well known outside of their local art scenes, now standing under a brighter spotlight because of the exhibition.

Without “State of the Art,” Khare said, there would be no solo show in Boise. Being selected for inclusion by curators Don Bacigalupi and Chad Alligood of Crystal Bridges Museum of American Art, where the show opened in 2014, added “legitimacy” to her career, she said.

“This is a dream come true, to be a part of this show,” Khare said.

Maybe it just seems obvious in a place like Minneapolis, with its network of non-profit galleries and its endless art crawls, but there are thousands of American artists making vital work that goes largely unrecognized. “State of the Art” is an audacious attempt to survey that vast landscape.

The Bentonville, Ark., museum spent $4 million on the show, ultimately acquiring most of the work on display. Bacigalupi and Alligood logged 100,000 miles crisscrossing the country over the course of a year, visiting and interviewing 900 artists in their studios. They purposely looked beyond the major-league art scenes in New York, Los Angeles and Chicago.

The original exhibition closed at Crystal Bridges in Jan. 2015, and then the works were divided up into two separate traveling shows. Minneapolis gets the slightly larger of the two.

In the exhibition catalog, Bacigalupi writes that they evaluated artists based on their engagement with their communities and the ideas in their work, their mastery over their medium and the “appeal” of the works — a definition that, for him, pits generous and open works against “the hermetic, ‘impossible to understand’ stereotype of contemporary art.” For good or ill, the co-curators don’t seem to want viewers wrestling with nettlesome (but often illuminating) questions like: “Why is this art?”

It can be difficult to get a grasp on “State of the Art,” since there’s no real through-line other than the art’s now-ness, having all been created since Crystal Bridges’ opening in 2011. And so you stumble upon a succession of delightful surprises.

There are wide-ranging examples of virtuosity, from Jamie Adams’ sexually charged Old Master-style oil painting “niagaradown” to Joel Allen’s expertly crafted mixed-media sculptures, which are woven from twine, plastic tubing and prescription medication bottles and other found objects but look as if they were the result of some natural process. Omaha artist Watie White mischievously inserts visual gags into his tour-de-force woodcut of a train yard under swirling skies. Mary Ann Currier’s small, understated abstract paintings, which resemble sheets of colored paper spilled onto the floor, project an aura of calm into the gallery.

“State of the Art” is rich with compelling video work, including Lenka Clayton’s “The Distance I Can Be From My Son,” in which she films her young child running further and further into the distance until the she finally jumps out from behind the camera to chase him down. Viewers squirm and then laugh. Then there’s “Kora,” a dreamlike 14-minute video by Jawshing Arthur Liou shot on pilgramige to Mount Kailash, a sacred Tibetan peak, which is utterly entrancing.

Several of the most powerful pieces in the show engage with African-American identity and communities. Three large photographs document a performance by the young artist Wilmer Wilson IV, who covered himself in, and then removed, a suit of inflated paper bags — a reference to the bags’ use as a measure of skin tone. And one of the most remarkable objects in the entire show is a mixed-media assemblage by Vanessa German, who constructs what she refers to as “contemporary power figures”; a sculpture of two black children is meant to exert a protective force over her troubled Pittsburgh neighborhood. 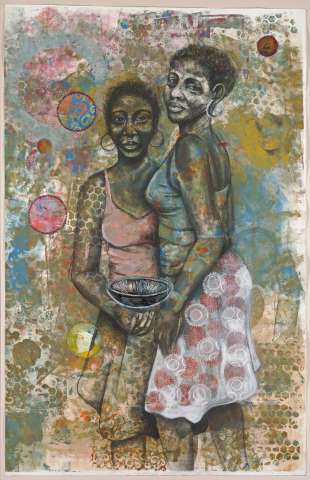 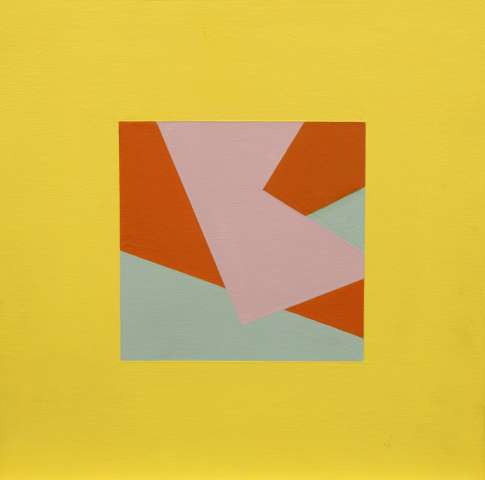 A mixed-media piece by Delita Martin of Little Rock, Ark, left. Below, one in a series of geometric abstractions by Mary Ann Currier.