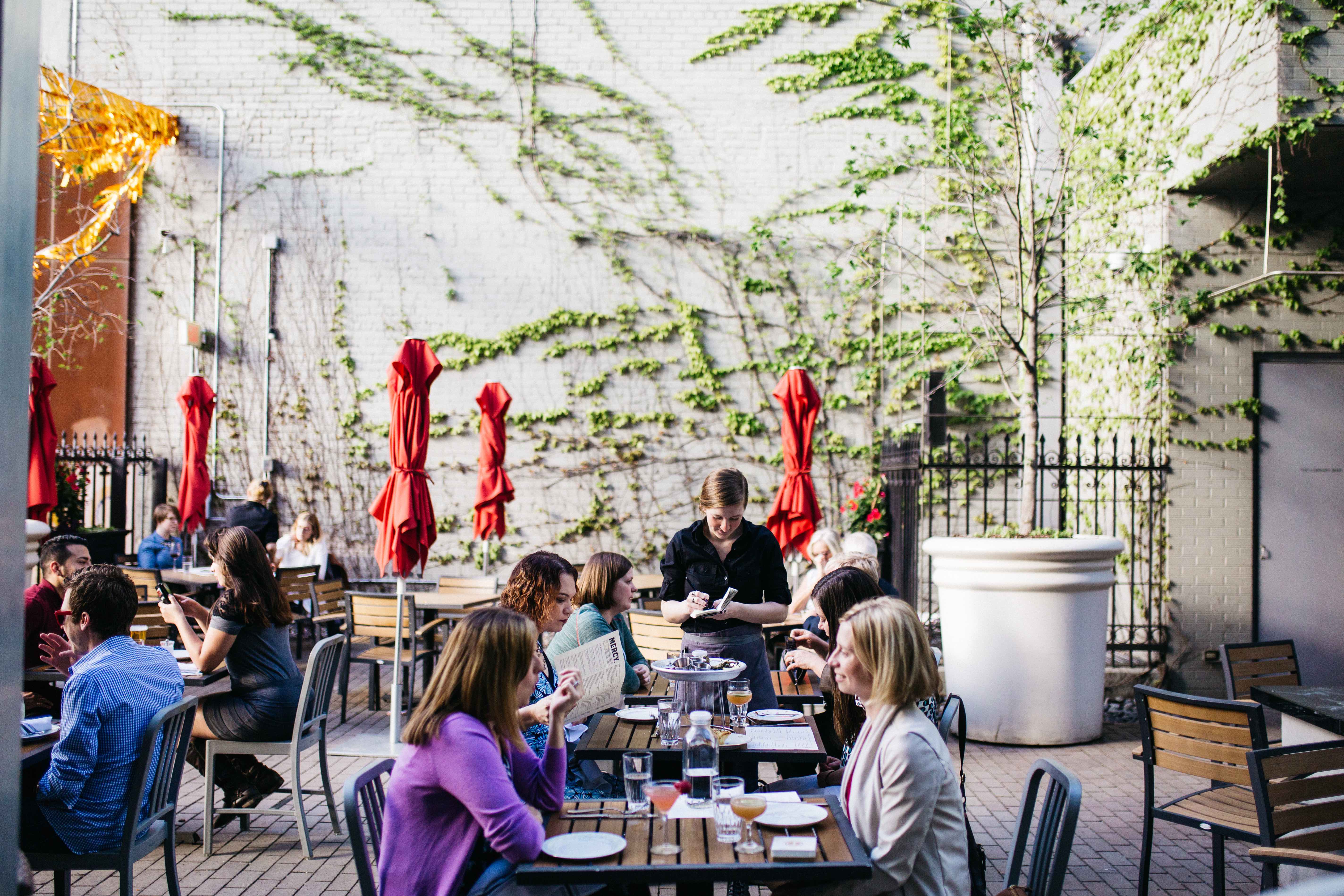 Shea Design is behind many of downtown’s unique patios

Tanya Spaulding describes her career as eating out for a living.

As the principal of Shea Design, a downtown-based firm that designs and consults with restaurants, Spaulding is on the frontlines of the local dining scene. As summer approaches, she said local restaurateurs call her to prepare for the rush of diners looking to eat outside.

She said it’s never been more important for restaurants to embrace the outdoors. A patio is their first impression and the first opportunity to create the “wow factor,” she added.

“Over the last five or 10 years, outdoor spaces across the country have become critical, even in climates where you don’t get a lot of days outside,” she said.

Shea’s clients feature several unique ways of enjoying food outside, from the enclosed rooftop at Union to Mercy’s courtyard, complete with a fire pit and, in the winter, an ice bar. Whether it’s operable windows, heaters or umbrellas, Spaulding says restaurants are using whatever tools they can to get as much outdoor business as possible.

“We want to extend those three months of patio season as much as we can,” she said. “Our philosophy at Shea is really to integrate the outdoor space with in the indoor space as much as possible… It’s not just mimicking inside, it’s creating what kind of patio experience fits this restaurant and can complement it.”

From the indoor-outdoor bar at Eastside to the sidewalk counter at Spoon & Stable, the firm is behind several al fresco dining destinations, all located within downtown Minneapolis.

Downtown diners may recall the Joe’s Garage rooftop in Loring Park, but much of that changed when 4 Bells moved into the park-adjacent space. The seafood and chicken restaurant from the team at Butcher & the Boar features several dining spaces, from the 12-seat seafood bar to private areas like the Hickory Room, but the rooftop is its own destination. The fully enclosed, climate-controlled roof boasts room for 180 people, including 100 seats open in every season. While it’s typically closed during the week and for events in the winter, the rooftop and attached patio opens up to all — including pets — in the warmer months. Besides the rooftop, 4 Bells has another outdoor dining area in the alley outback. It features a mural depicting a colorful, tumultuous brawl between the Kraken and Poseidon courtesy of local artist Adam Turman, the same creative mind behind the art at Butcher & the Boar.

Around the corner from its Hennepin Avenue storefront, Butcher & the Boar has a four-season beer garden. Despite being outside, Spaulding said the beer tent has the luxuries of home — both heat and air conditioning — which means people can enjoy dining al fresco without worry of the elements.

“People can be outside but they can still have the protection and heat that they need, and it fits with their beer-garden feel,” she said.

It also means the smell of Butcher & the Boar’s smoked meats, sausages and Southern-style eats can waft outside the restaurant’s footprint between downtown and Loring Park. The restaurant, which has another outpost in Charleston, South Carolina, hosts special events, private parties and keg-tappings out of the roughly 80-person, dog-friendly space. Music and live bands are welcome.

Depending on what side diners are on, they can belly up to the bar inside or outside at Eastside. Spaulding said the bar and restaurant, located on the ground floor of downtown’s Latitude 45 luxury apartment building, integrates the outdoors by opening a unique operable screen window that opens right alongside the three-sided bar.

“So, you can sit outside and be part of the indoor bar experience,” she said. “That really connects the two spaces.”

Eastside, opened in 2015 by local restaurateur Ryan Burnet, offers a modern American menu with oysters and seafood, burgers and several original takes on vegetables. The restaurant has an outdoor patio that is open in the warmer months. It’s separated from the bustling Washington Avenue with planters and a short wood fence.

Mercy’s outdoor escape is a courtyard with both ice and fire.

Chef Mike Rakun opened the restaurant and bar on the ground floor of the Le Méridien Chambers Hotel in the former Marin space. The space came with an outdoor courtyard, complete with a fire pit to keep it comfortable in the spring, summer and early fall.

That’s not all the restaurant does to keep the courtyard welcome to diners. Spaulding said Mercy invests in fresh flowers and greenery to wrap its frontage along Hennepin Avenue, as well as the outdoor dining space. When it’s less active in the winter, Mercy has experimented with an ice bar, which it’s called the MNice Bar. The bar was home to a heated dome, an ice shuffle board and an ice lounge over the cold months. Hot cocktails keep guests toasty.

“Our challenge was: Can we activate in the winter months too? How can we morph this space?” Spaulding said. “They’re really putting a lot of time, attention and investment.”

One of the newest outdoor dining spots in downtown is McKinney Roe, an Irish bar and restaurant from O’Donovan’s Irish Pub restaurateur Dermot Cowley and Waconia-based Irish Born Hospitality. It’s one of the first to capitalize on the newly created Commons park near U.S. Bank Stadium, a two-block park that serves as its front yard.

McKinney Roe has room for 150 on its outdoor patio. For a view without the elements, the interior has a mezzanine with seating overlooking the Commons and the rising Downtown East neighborhood.

The restaurant serves American and Irish fare, as well as cocktails. Its signature dishes include seafood ceviche, the double McKinney Roe burger and the pork shank.

While it doesn’t technically have outdoor dining, Spaulding said, Spoon & Stable emphasizes each foot of available sidewalk space with an operable garage door window. Along the opening is one counter with seating that lines the sidewalk.

One bonus at Spoon & Stable, the restaurant from James Beard Award-winning chef Gavin Kaysen, is the greenery outside. Spaulding said the best thing a restaurant can do to draw in outdoor diners is invest in flowers and a little green, even if it will only last a few months.

“It really is singularly one of the best first impressions to see flowers and green,” she said. “I think that’s the thing that gets missed the most, especially in this market.”

Union’s rooftop is home to the state’s only heated, glass-enclosed rooftop open year-round, even when it snows.

“You can use it literally every day of the year,” Spaulding said. “You feel like you’re in a snow globe. You still get the downtown views.”

Union’s rooftop changes with the weather, whether that means the roof’s enclosure is partially open for warm but rainy days, closed for cold seasons or open for summer happy hours.

“That’s really a complete integration between the (outside and the inside),” she said.

Beyond dining, Union’s rooftop hosts concerts, weekend dance parties and drag brunches. The roof has a menu independent from the main floor, with burgers, pasta flatbreads and a selection of house cocktails.