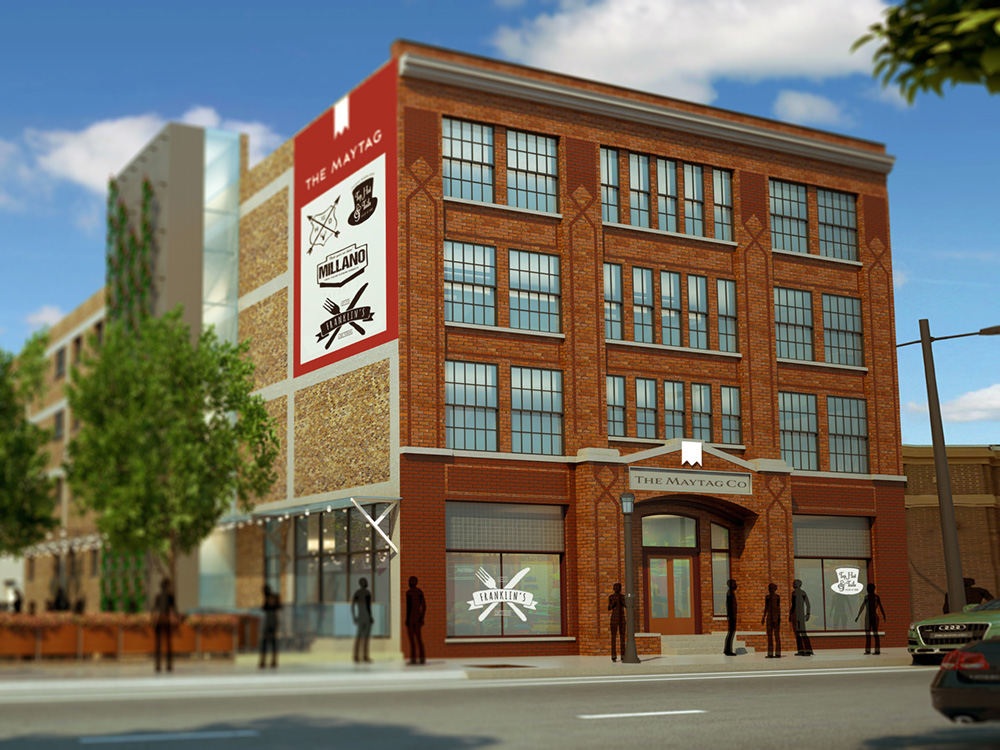 The former Gardner Hardware building and current home of both the Nolo restaurant and the Basement Bar is now 100 percent leased with the addition of WD Flooring, which opened a new, 1,400-square-foot showroom on the ground floor, according to Saturday Properties’ Brent Rogers. His group bought the 40,600-square-foot building in May of 2016 for $4 million and renovated it for another $13 million. Maytag is now home to Clear Night Group on all three floors of office space with NoLo Kitchen on the ground floor and the Basement Bar on the lower level.

Minneapolis-based Community Housing Development Corp. has taken major downtown developer Ryan Companies to court over the East Town Apartments project, a yet-to-be built $37 million, 169-unit affordable housing complex. Ryan has already sued the group for $2.3 million for design management and other services. The complex is directly across the street from U.S. Bank Stadium in what is now the First Covenant Church parking lot. Tied up in the dispute is Ryan’s claim that it contributed significantly to the project’s design, which is now in the hands of UrbanWorks Architecture.

Affordable housing will now be a focus for a North Loop project on the site of the Zuccaro’s Produce building. Schafer Richardson originally proposed a $28 million development with offices and market-rate apartments. Shifting gears for an affordable housing development has brought an authorization from the Hennepin County Board of Commissioners to issue up to $17 million in tax-exempt revenue bonds. What will now become a six-story building with 109 apartments (studio, one and two-bedroom) will still have as much as 10,000 square feet of commercial space. Construction will begin next summer.

With phase one of The Expo already well under construction on the old General Mills site in the St. Anthony Main area, developer Kelly Doran has presented Marcy-Holmes neighborhood residents with plans for the final 6.5 acres of land he purchased in 2017. The plan calls for 850 residential units with approximately 100 of them affordable. Whatever the city approves, Doran has promised the neighborhood creation of an on-site road between University Avenue Southeast and 2nd Street Southeast, something many in the area have been asking for. Phase One is a 372-unit luxury apartment complex, featuring a 26-story tower. That project is expected to open in 2020.

What had been the Bradstreet Crafthouse, one of Minneapolis’ first craft cocktail bars, may soon be giving way to a 41-unit apartment complex for young adults — as young as 18 — leaving foster care. The project by Graves Hospitality and the St. Paul-based Landon Group is spearheaded by Bill Graves, president of the John and Denise Graves Foundation. Jim Graves owned the Bradstreet Crafthouse property. The bar has been relocated to Minneapolis-St. Paul International Airport and the Graves-operated Intercontinental Hotel. Studio apartments will be the primary unit type, with the rest being one-bedroom. Construction is expected to begin in the summer of 2019.

Minneapolis has granted a variance “to reduce the minimum loading [dock] requirement from 3 large spaces to 0 spaces” to facilitate construction of the city’s new 12-story, 377,000-square-foot administrative building. According to a city statement, “The project will consolidate a significant portion of City of Minneapolis full-time employees in a variety of city departments including the primary public service center for Community Planning and Economic Development as well as permitting and customer service for a variety of city services. The building will serve as the central office for the Minneapolis Police Department.” The site was occupied by a 26-year-old, nine-story, 962-stall parking garage. The new city office building will be complete by summer 2020, according to the city.

Opus Development — subtitled here as River Loop Joint Venture LLC — recently closed on a vacant Star Tribune parcel and is moving forward with construction already this fall. Matt Rauenhorst, Opus vice president and general manager, the developer is looking at 218 market-rate units for the project, including one- and two-bedrooms as well as penthouses. Rauenhorst said they will include “first-class amenities throughout.” He added that the developer sees “very strong demand for housing along the river and into the North Loop across the entire spectrum.” Construction is expected to finish by the spring of 2020. Design sketches of the project will be available in the next few weeks.

Developer Schafer Richardson has applied to put up two buildings totaling nearly 127,000 square feet on a 2.9-acre parcel in the Logan Park neighborhood. One would include 179 rental units, and the second is described as artists’ space. The current use of 854 14th Ave. NE, according to the city, is vehicle and trailer storage with separate structures for minor vehicle repairs and an office. Outdoor vehicle storage is the primary use at 902 14th Ave. NE, while 904 14th Ave NE is an existing duplex. The residential building is proposed to be six stories, with a combination of studios and one-, two- and three-bedroom units. The units will be income-restricted to households earning 60 percent of area median income or below. Given a smooth financing process, the company aims to begin construction in the second quarter of 2019.

Hyde Development will conclude another brick-and-timber commercial renovation in the fourth quarter according to company founder and partner Paul Hyde. The finished building, purchased from the YMCA, will offer 30,000 square feet of space adaptable to pretty much any type of office, artistic or retail use. Hyde said the brick-and-timber look is both “consistent with the neighborhood” and similar to other projects they’ve finished in Uptown and the North Loop. The building, currently undergoing demolition work, has 85 spaces of surface parking, making it attractive for a taproom, Hyde said, adding: “We could do the whole thing for one tenant, but we think it’s better with three or four.”

The Minnesota Twins plan a full announcement in the next couple weeks about plans to renovate the plaza area beyond the existing right field gates. No sketches are currently available, but Dan Starkey, the Twins’ senior director of ballpark development and planning, said the new construction is in conjunction with a plan to extend the stadium’s security perimeter out beyond its current reach. Ticket and security gates will move away from the stadium in right field and out to the end of the refurbished plaza. Other amenities and improvements will be announced in the near future.