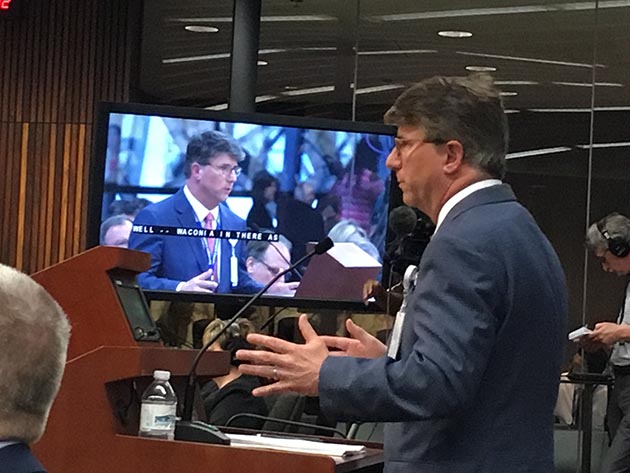 Hennepin Healthcare Chief Medical Officer Dr. William Heegaard testified June 26 in front the Hennepin County Board about a halted study on the use of ketamine as a pre-hospital sedative. File photo

The city will not move ahead with an independent investigation into the use of ketamine on people detained by Minneapolis police.

The City Council on Sept. 21 voted 10-3 against awarding a $195,000 contract for the investigation to former Acting U.S. Attorney General Sally Yates and King & Spalding LLP, the Atlanta-based law firm where Yates is a partner. Mayor Jacob Frey in June recommended Yates lead an inquiry into whether Minneapolis officers improperly encouraged emergency medical services personnel to administer ketamine, a powerful sedative, to people in police custody.

Questions about interactions between police and ambulance crews came to light after the draft version of a report by the city’s Office of Police Conduct Review was obtained by the Star Tribune, which published an initial story in mid-June. OPCR didn’t deliver a final version of its report to the council until over a month later, on July 26.

Several council members who voted against the Yates contract said they were satisfied with the OPCR investigation and did not want to duplicate the office’s efforts.

The OPCR report found the lack of a policy around interactions between police and EMS crews created a risk that officers would influence medical decisions. It found eight cases between 2016 and 2018 in which “MPD officers participated in the decision to administer ketamine.”

In May, prior to the release of the report, the department responded to concerns raised by EMS personnel and, in a memo to officers, clarified that medical workers have the final call on the use of sedatives.

In response to media reports, Hennepin Healthcare, formerly known as the Hennepin County Medical Center, acknowledged in June that EMS crews had been equipped with ketamine since 2008 and that the hospital was conducting a clinical trial on its use to treat excited delirium, a potentially life-threatening condition, before patients arrived at the hospital. It was being tested against another drug also used to treat agitated patients.

Hennepin Healthcare suspended the study in June as questions were raised about how and when participants granted consent. They were presented waivers after being hospitalized.

Council Member Linea Palmisano (Ward 13) joined Ward 9’s Alondra Cano and Ward 6’s Abdi Warsame in voting to approve the contract with Yates, arguing that to not do so would mean turning their backs on the public.

“This is something we all agreed was necessary just three short months ago,” Palmisano said. “We heard from the community. Their asks were clear. They wanted to get to the bottom of what happened between EMS personnel and our Minneapolis Police Department. They wanted to ensure impartiality, so they asked for the investigator have no Minnesota or Minneapolis ties.”

Ellison said he had not heard the same public outcry for an independent study, adding that the plan to hire Yates came “unilaterally” from Frey’s office.

“I think if we better work together and fully engage before decisions are announced we will have less of this back and forth, not that it’s a bad thing,” Bender said.

Weighing on the council’s decision was the effort to quickly find housing for members of a growing homeless encampment along Hiawatha Avenue. Although the council voted against it, Council Member Cam Gordon (Ward 2) attempted to redirect the study funds toward emergency assistance for the homeless.

Council Member Steve Fletcher (Ward 3) said the mayor’s push to hire Yates wasn’t out of line in June, but added the situation had changed with the receipt of OPCR’s full report and the need to respond quickly to a housing emergency.

“I just think that we have to be responsive to shifting priorities in our city and to shifting needs as we learn more,” Fletcher said.