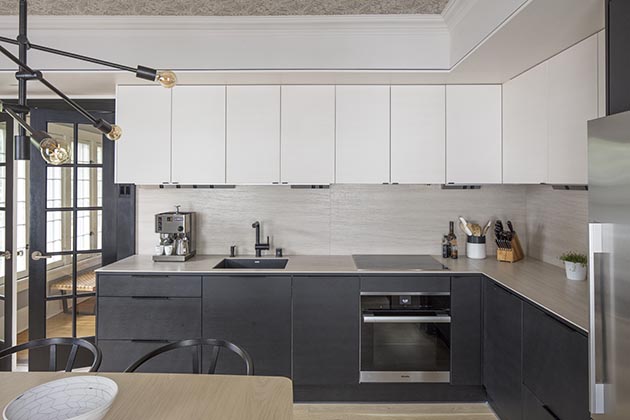 When my partner Scott and I bought our charming little bungalow in the fall of 2012 I was immediately sketching possibilities for a little bump out here or a brise-soleil there.

However modest, these ideas were always about addition. In the years since, we’ve become ever more aware of our home’s personality, its petulant squeaks and generous light, and our focus has shifted from adding space and features to the selective editing of existing conditions. 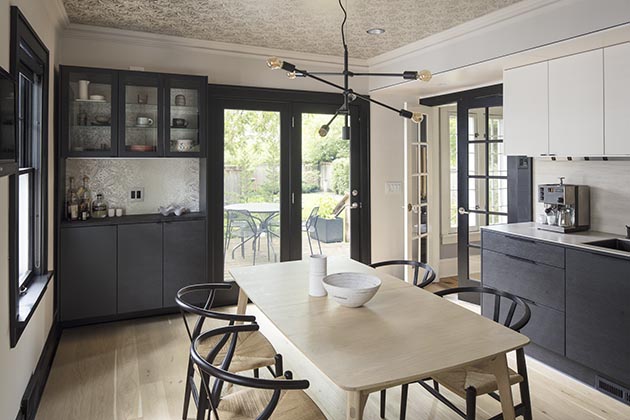 One of our delights in the home is the intimate scale of its rooms surrounding a central, shotgun-style living room. Its biggest limitation, however, was the lack of a dining room. The kitchen had been renovated, presumably from the original, in the late 1990s to include an island and range in the center of the room, resulting in a mere 24-inch passage between counter and island, and no way to seat more than four people and still walk through the room.

Adding a dining room and expanding the kitchen was a tempting design solution on paper, but reality posed more challenges: the existing structural shortcomings of the house, our budget and the financial impact on future goals. I often encourage clients to “design smaller to build better,” so why not practice it?

The first priority became creating space for a dining room within the existing footprint, ideally near the cooking area. So borrowing from a centuries old tradition — there was no need to reinvent the wheel here — we treated the 12-foot-by-15-foot room as a contemporary farmhouse kitchen, surrounding a table with cooking functions.

The second priority in this solution was to create a subtle illusion: for guests to first perceive the renovated space as dining room, followed by the reveal of a functional kitchen.

By moving all of the functional parts — storage, plumbing and appliances — to the interior perimeter and placing them all under an expanded soffit, the table is centered under the taller ceiling in the middle of the light-filled room. Though most of the appliances stayed near their original location, this compact solution relied on a few unconventional selections, including a single-basin sink, 18-inch dishwasher, Euro-sized oven and smooth glass induction cooktop. 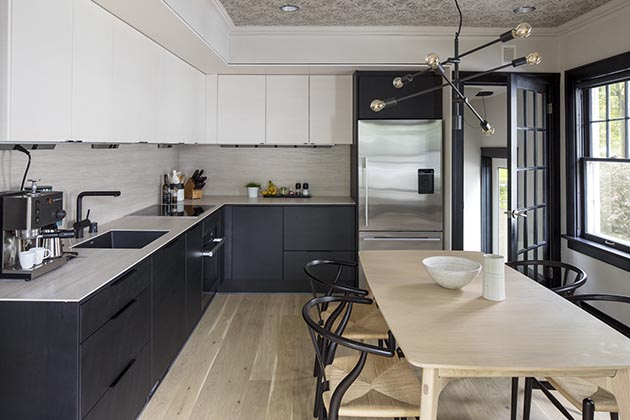 We loved the black enameled trim that already existed in our kitchen, which fit our personal aesthetic and furniture and became a starting point for finishes. Selecting ebony stained oak base and buffet cabinets visually reduces their mass while whitewashed upper cabinets bounce light around the room to keep it bright for everyday use.

By contrast, after exploring a plethora of options, the wood floor and table are a neutral European oak for a warm and inviting centerpiece around which to gather.

The cabinet scheme was part of the original design solution, but our actual selections were made after becoming enamored with the thin, large-format ceramic countertops offered through Puustelli USA, a Finland-based kitchen company new to our market. Working with the Finnish company introduced us to features uncommon in the states, including a drip-drying rack hidden in the cabinet above the sink, which has become Scott’s favorite feature of the new space.

Not surprisingly, a few lessons were learned along the way.

The first was with electrical work. It was important for us to keep the upper cabinets at a continuous height, which required them to be slightly higher than normal for proper clearance at the sink and cooktop.

We knew this would increase visibility of items usually hidden under the cabinets. What surprised me, despite being familiar with kitchen electronics, was how much stuff (connections, conduit, etc.!) is commonly hidden by valances and, more successfully, skilled custom cabinetmakers.

Since ours were semi-custom modular cabinets at an unusual height, we were inevitably putting it all on display. This meant a few product upgrades, including continuous LED channel lighting and a high-grade plug mold to avoid cutouts in the ceramic backsplash.

The second lesson was that no couple should attempt to hang wallpaper for the first time together, or ever. Our relationship survived the attempt, but only because we quickly threw in the paste-soaked towel and called a professional to hang the ceiling!

Our kitchen would not suit every family, but it is exactly what we needed: a place to cook, eat and gather that reflects who we are and how we live, all within our existing walls.

Bryan Anderson is a principal at SALA Architects.