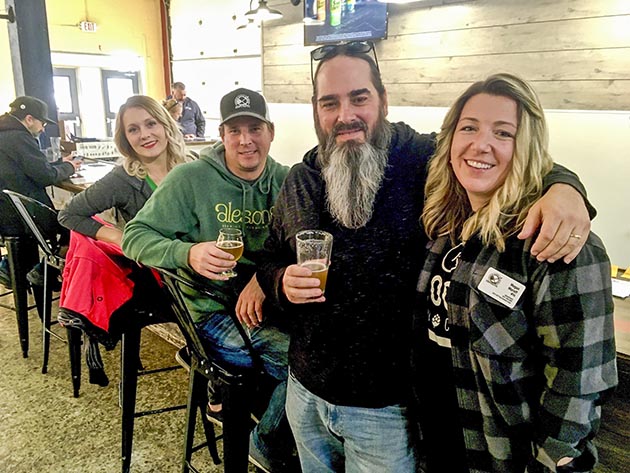 No kids, we have not yet reached “peak beer.” The golden age of suds brewing and imbibing is not cresting yet.

The boom is still going strong enough that the 600-plus-member Broken Clock Brewing Cooperative up on California Street in Northeast’s arts district has opened its own taproom, with an official grand opening scheduled for Nov. 9.

After a year-and-a-half in the brewing and wholesale business, team Broken Clock has taken over a warehouse lease and expanded with a 6,000-square-foot taproom located at 3134 California St. NE, the better to serve fans of its — count ’em — 20 beers (at least).

Seasonal brews include Constitution Cream Ale (light, crisp and mildly malty with a smooth mouthfeel and very low bitterness), Nordic Night (chocolate and spice aroma with strong dark chocolate and toffee flavors intermingled with spices, including nutmeg, allspice, ginger and cinnamon; and Red Coats, a New England-style IPA (hazy and juicy with the aroma of a hopped-up IPA but without the harshness, it’s loaded with hops featuring citrus and tropical fruit flavors, and a blood orange infusion lends a tart, citrusy bite).

The above-mentioned Mathison, also the brewery’s co-creator and operations manager — voted into the job of doing all the really fun bookwork — seems to like making a point of Broken Clock’s bona fide 308A tax standing as a 100 percent owned-by-members operation, with each member having an equal vote.

(So, you may wonder, do a couple beers help the group agreement process?)

“A 308B can have to 85 percent equity partners with only 15 percent members. But we are a 308A, which means everyone involved is member. One-hundred percent,” he said. “And that means people from Rochester to Duluth, as well as the Twin Cities.”

Broken Clock, which moved its operations into the old 56 Brewing plant, is the second cooperative brewery in Northeast after Fair State Brewing. And yes, you too can become a member with full voting privileges and other perks. Contact Mathison or drop in to find out how.

The new taproom, designed in part by members also tied into the area’s arts community and largely renovated by member labor — after hiring out the code-precision stuff like electrical — was a team effort.

“I’d say members did 75 percent of the work on the room,” Mathison said.

The taproom phenomenon is familiar to pretty much everyone who has ever hoisted a cold one, and Broken Clock is honoring the basic traditions, some of which are of course controlled by city statutes. There will be regular music and, as you might expect, constant food truck service.

“Some of the members own trucks, so they’ll be around quite a bit,” Mathison said.

As with other popular taprooms, Mathison and crew are planning a steady flow of events to keep the crowds coming in and entertained. The co-op plans to tap member labor again next spring to add a 3,000-square-foot outdoor deck and beer garden on the north side of the taproom.

“We really want this whole space to be family friendly,” Mathison said.

The design includes a dedicated kids space. Solo, unattached hipsters alone do not sustain a large taproom, no matter how robust the beer culture.

So, “the beer thing” still has a way to go before it peaks?

“We sure think so,” said Mathison. “I read that the Twin Cities is something like 10th nationally in terms of beer consumption, but only 16th for capacity. What that says to us is there’s still a pretty big range between demand and supply. We think we’ll be fine.”