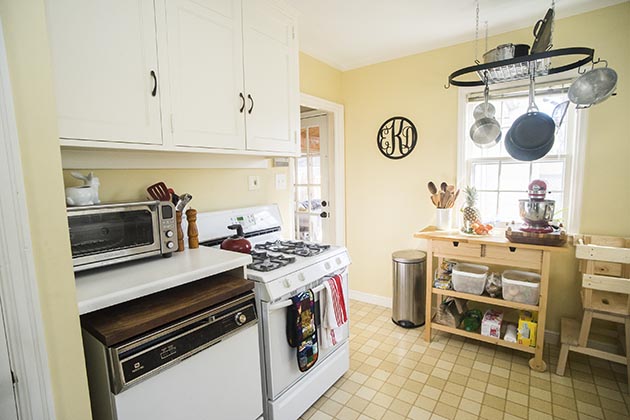 When we left off in these pages with the story of the kitchen remodel of Elizabeth and David Kruger, whose story appeared in the spring Home Guide, they had found a Lanesboro-based contractor willing to take on their relatively small kitchen remodel project in the Lynnhurst neighborhood at a reasonable budget within a specific timeframe.

So, how did it work out?

All the upfront work they did seemed to pay off. They found a recommended contractor through word of mouth. They sought advice and paid attention to project-management details for each element of the remodel. They purchased all materials in advance, largely with reputable local dealers. They even opened the boxes ahead of time to check, for example, that the tile was a uniform color.

The reputation for good service was key. When a few things went wrong — the kitchen sink with the hole for the faucet drilled slightly off, new paint that mysteriously peeled off on one wall — manufacturers quickly replaced the materials with something that worked. The contractor was hands-on as promised, coming up from Lanesboro three days a week, and he started and finished on time.

The longest delay was after the cabinets went in, when they had to wait two weeks for the measurements to be converted into a precisely fitted countertop.

The story started when the Krugers decided they were tired of having a rollout dishwasher plugged into the sink faucet every time they needed to use it. Installing a new model near the sink piping required relocating the refrigerator, which necessitated adjusting a pantry cabinet, which made them realize it was a good time to replace the cabinets throughout. And update the stove and sink and countertops while they were at it.

Like so many relatively small home adjustments, an entire process of other steps came with it — yet not enough to warrant the attention of the many larger local contractors they called, especially since the footprint of the house was not expanding.

In the end, without adding on space or taking down walls, the kitchen feels more expansive. Including the glitch with the kitchen sink that required waiting only a few days for a replacement, the remodeling process took less than eight weeks — and about eight trips to hardware stores.

In the original spring 2017 story about the Kruger remodel, they offered tips about how to prepare for a project and what they learned in shopping for contractors. After going through the process, they offer a few more tips:

— Keep looking for better deals even after you buy.

After they found a sale price online at Home Depot for the refrigerator model they purchased — but not yet delivered — they called Warners’ Stellian. The appliance dealer was able to drop the price by $400.

— Keep all your receipts.

In this paperless society, it is easy to forget how important it is to have a trail if materials need to be returned or for price matching, taxes or reappraisals in future.

— The city permit process was less of a hassle than expected.

They did their own plumbing to save money. In pulling permits, a city representative offered advice over the phone. The inspector was in and out in minutes.

“We assumed it would be a scary, invasive process, and it wasn’t,” Elizabeth said.

— Because they used companies with strong reputations who were licensed providers, the city approval process was easy.

Vendors had been pre-approved for ease of process. The Krugers also asked for customer references and made calls to learn about past projects.

Removing the long cabinet from their 1940-built home might have been challenging; it was fitted inside the house from one very long piece of wood. Yet they were able to salvage it for someone else’s use by pulling it out the slightly enlarged window well.

In fact, nearly everything from the remodel found a new home elsewhere, without going to a landfill. They ended up with only two small tubs of refuse. The rest of the former kitchen parts, including the cabinets, found their way through Craigslist and the Nextdoor app to neighbors happy to buy the appliances and materials. They brought the metal to a scrap yard.

“We learned how little you need all the stuff that fills your kitchen,” Elizabeth said. “We washed dishes in the bathtub, ate meals from a crockpot, grill and toaster oven.

“Temporary plates were compostable, thanks to the city. I wondered why we need all of what we have.”

They even found some treasures in the old walls. Insulation consisted of newspapers with World War II headlines. Found artifacts included buffalo nickels, a pass to a Minneapolis ice rink from the 1940s and campaign literature for a 1950s city auditor.

The people they met during the up-cycling and re-use process were also a plus, they said, such as the retired vet rebuilding his 1940s home, who worked alongside them for a few hours to remove the cabinets.

The experience was so positive, Elizabeth said, that they are eager to begin a new home project: remedying the water-in-the-basement issue.

The only minor trauma during the process was that of their two-year-old daughter, who was nervous about the demolition stage. Eventually she was excited to see the extended sink as a potential new bathtub.

It might not be the right time for her to visit her nearby grandparents, however. They’ve been inspired and have recently done demolition on their own kitchen remodel project.