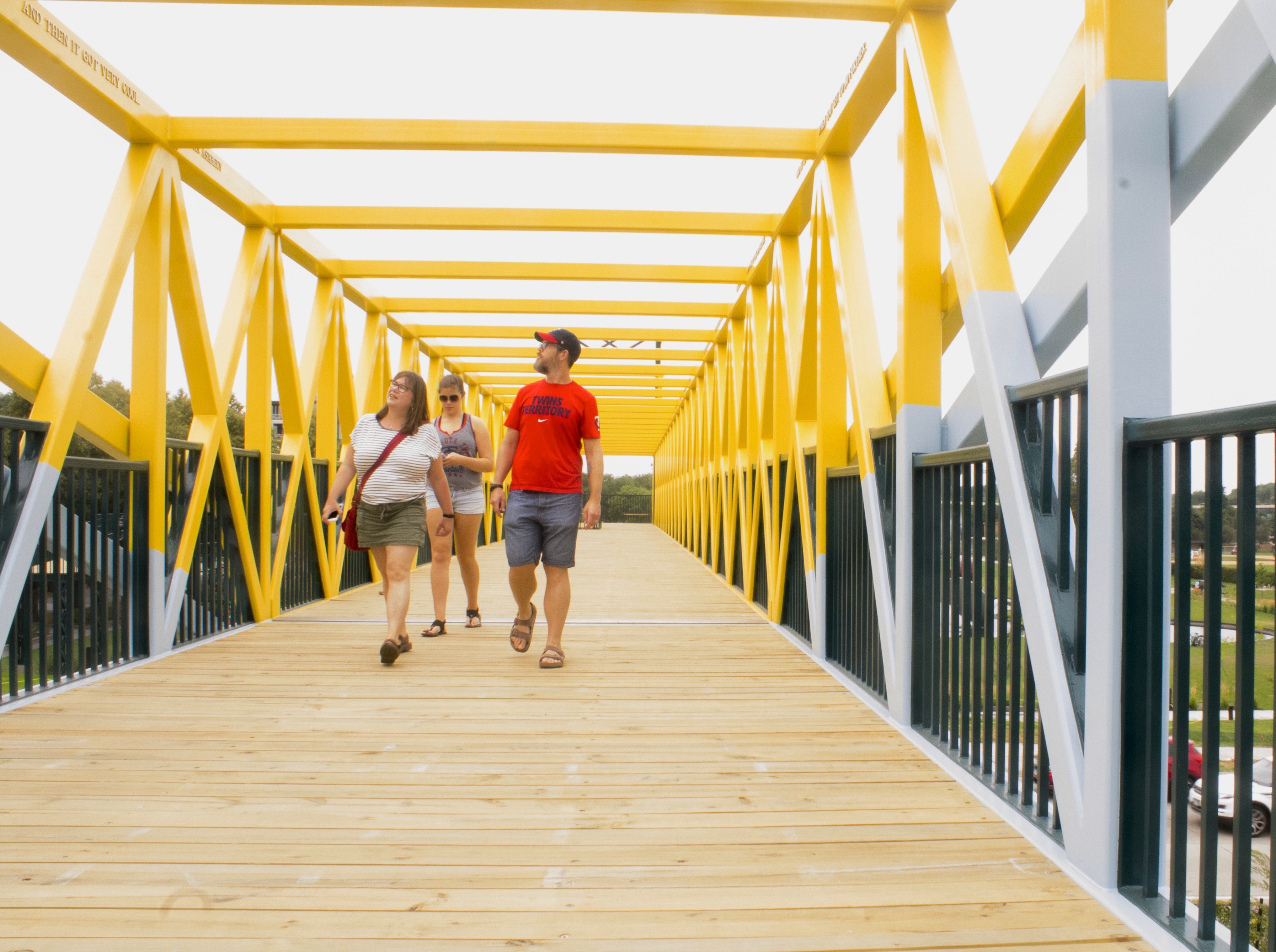 After a renovation, the Irene Hixon Whitney Bridge is back in vibrant color

The iconic pedestrian bridge connecting Loring Park and the Minneapolis Sculpture Garden re-opened in August after a three-month makeover.

The Irene Hixon Whitney Bridge, designed by Siah Armajani, will be in top shape for the Sept. 9 opening of “Follow This Line,” the Walker Art Center’s retrospective on the Minneapolis-based artist’s work.

The 375-foot bridge, which spans 16 lanes of traffic over Interstate 94, underwent a $2.5 million reconditioning by the Minnesota Department of Transportation starting in early May. The renovations were mostly cosmetic: repainting the bridge’s distinctive colors — blue, yellow and green — installing a new wooden deck and replacing the metal letters of a poem by Pulitzer Prize-winning poet John Ashbery that lines the walkway.

The Walker also plans on adding a string of lights across the steel headframe in the coming weeks, illuminating the bridge for the first time, a detail from the artist’s original vision.

The bridge, named after a prominent Twin Cities arts patron, was commissioned by then-Walker director Martin Friedman for the opening of the sculpture garden in 1988. Armajani designed the walking bridge “to knit together” different parts of Minneapolis, Walker curator Victoria Sung said.

“The bridge has become somewhat of an icon to the Twin Cities,” Sung said, even if many people don’t know its history. “So many people drive under, walk across, bike across that may not have registered that it’s a work of art as much as it is a functioning bridge.” 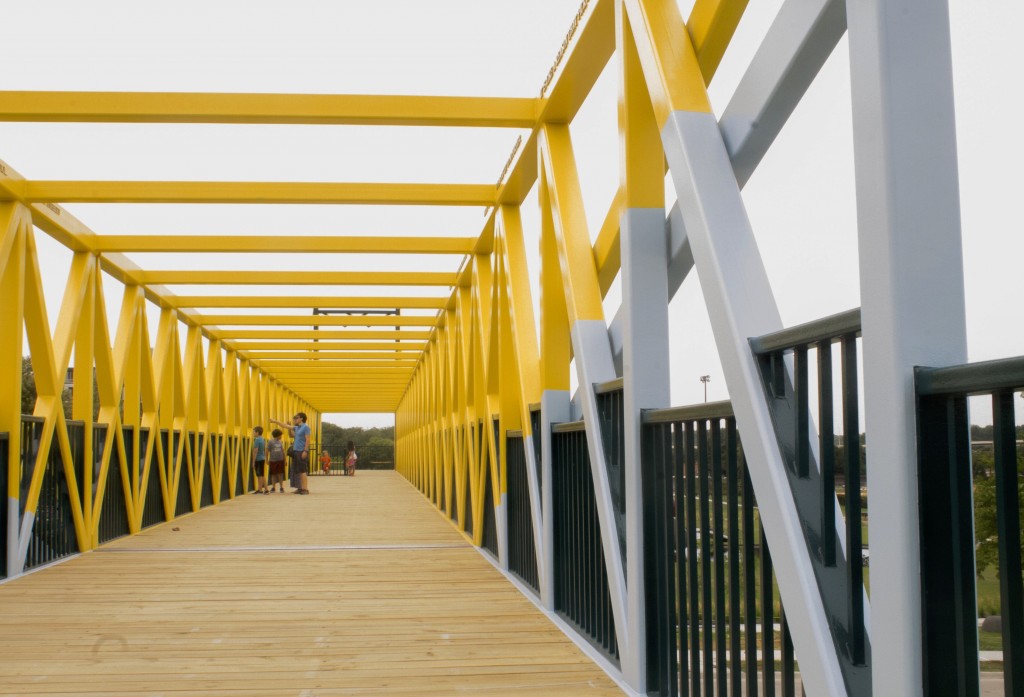 The bridge is a “sculptural-architectural hybrid” made up of a rectangular frame with crossed steel beams and opposing arches that join together in the middle.

“When you look at the bridge, it actually takes different types of bridges and puts them together in a single bridge,” Sung said, pointing out aspects of a suspension bridge are combined with an arch bridge.

“While it’s functional, it also has quite a bit of Armajani’s artistic sensibility,” she said.

Armajani and the Walker worked closely with MnDOT during the renovation to ensure repairs matched the artist’s aspirations, an experience that doesn’t usually happen for the typical project, said Christian Hoberg, a MnDOT project manager.

“As an agency of engineers, we approach [repairs] from an engineering perspective,” Hoberg said.

Armajani, on the other hand, provided more artistic direction.

“He just wanted to return [the bridge] to his original conception,” Hoberg added.

The partnership was especially important during the repainting process. Armajani originally painted the bridge in what he referred to as “Jefferson yellow,” a color derived from Monticello, and a “light pale blue,” a reference to Minnesota’s blue skies, Sung said.

Because the colors had faded over time, MnDOT could not simply sample the current colors and paint over the bridge. Instead they did a full reconditioning, covering the bridge with a plastic drape to blast down the paint off the steel beams and re-apply new colors, carefully selected and meticulously painted to match the artist’s design.

“We certainly did our homework … before we removed any paint,” Hoberg said. “[We wanted] to make sure the colors that were going to end up on the bridge were correct in [Armajani’s] eyes.”

In addition to other fixes, Hoberg’s team made minor structural repairs to concrete and small steel sections that corroded over time. The new tune-ups should last about two decades.

“With the passage of time, things deteriorate,” he said. 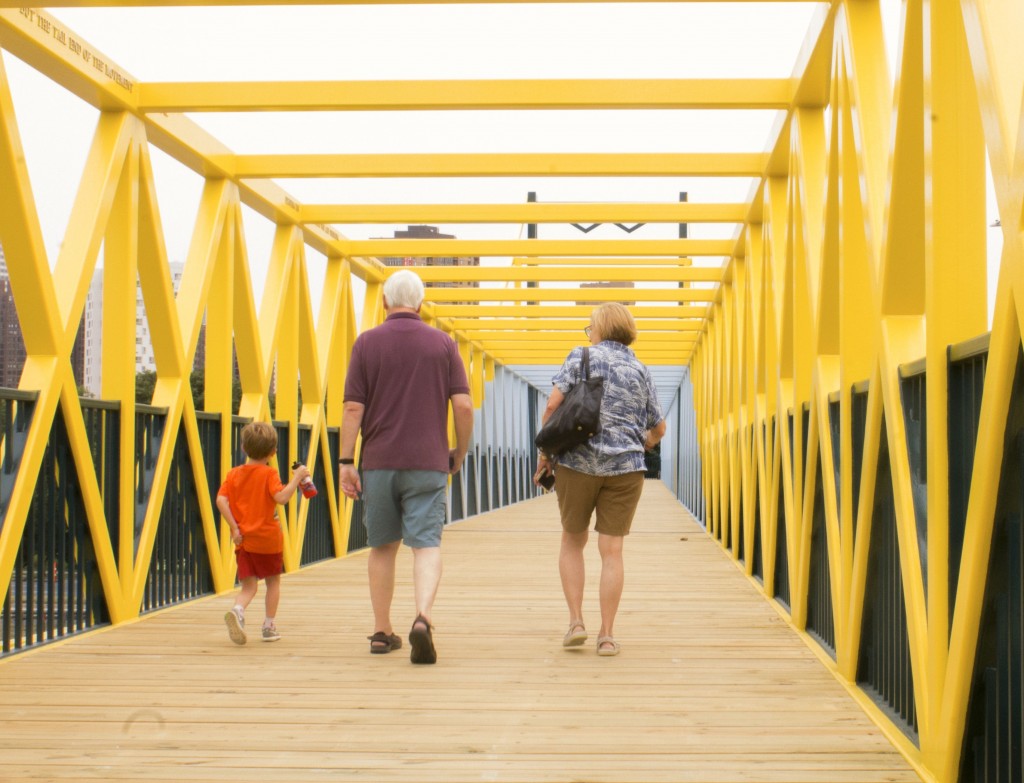 Sung was excited to show off the finished project, which she said will “give people the experience of walking across the bridge that the artist intended.”

On a warm Friday afternoon a week after it reopened, the bridge was bustling with visitors of all ages walking, running and biking across the walkway, many stopping to take photos against the skyline of the city.

Bev Hagen, a 54-year-old visiting from Hudson, Wisconsin, was visiting the bridge for her first time. Hagen said she enjoyed seeing the architecture, which she’s driven by for years but has “never taken the time to actually see it.”

“It’s like a living piece of art,” she said, admiring the Ashbery poem in particular. “It’s really beautiful.”

Nardos Senbeta was showing off the bridge to a visitor from Ethiopia, who said, “Seeing it, I love it.”

Paul Anderson, an architect from Bloomington who works near the Walker, remembered when the bridge was first built.

“I’ve always enjoyed it,” he said. “It’s an impressive sculpture.”

Anderson and his family said they would likely come back to see the Armajani exhibit, which covers the artist’s work over the course of 60 years.

“We really wanted to show people the other side of Armajani’s practice,” Sung said.

But the Irene Hixon Whitney Bridge will still serve as one of Armajani’s most recognizable works in Minneapolis. And with its new facelift, Sung thinks even more people will take notice.

“With this new refurbishment,” she said, “it’s something we’re trying to highlight again, bring people’s attention to again.”