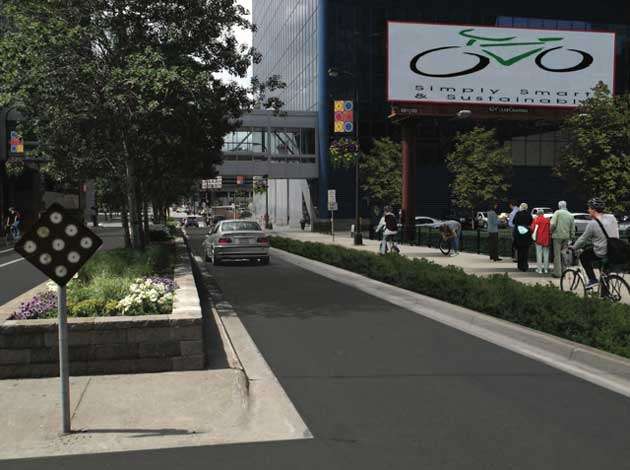 An illustration of a redesigned 3rd Avenue near 8th Street. Credit:

For the city of lakes, our downtown is not particularly verdant. The City of Minneapolis, Park Board and others have been working to change that. There is an effort called the “Downtown Public Realm Framework,” which will be a guide “for the management of the pedestrian experience” downtown. The Downtown Council has a Greening and Public Realm Committee, and Green Minneapolis is a new organization working to support new parks and green space downtown.

A proposal to redesign 3rd Avenue from the river to 16th Street ties into these efforts as well and has led to a discussion of the balance of greening on streets downtown. The city’s original proposal for 3rd Avenue would add 10 percent more landscaping and include the first planter-protected bike lanes in the city. Mayor Hodges and the City Council have budgeted $3 million to build the project this summer.

Recently, there have been some concerns raised about potential congestion that may result from the redesign. Specifically this is in the section south of 8th Street, where the proposal is to keep green center medians while reducing a lane of traffic, adding right-turn lanes and keeping left-turn lanes where appropriate.

According to a traffic analysis commissioned by the Public Works Department: “Maintaining the ‘center’ medians and adding the protected bike lanes south of 8th Street is expected to operate at a reasonable level during normal weekdays.” The analysis does note: “The impact to parking ingress/egress may be the primary concern.”

It’s delay to parking access that has principally led some businesses to ask that the proposed design be altered. Specifically, those who object have proposed keeping the fourth lane of traffic and removing the planted medians and planters along the protected bike lanes south of 8th Street. Business leaders have said they hope to add additional greening near buildings to make up for the lost greening, but no details of that are yet available.

Minneapolis has made the decision to move from four to three lanes before. There were similar concerns about delaying traffic before Lyndale Avenue was redesigned. Instead, we ended up with a functional street, additional green space and improved safety conditions.

According to the Federal Highway Administration, crashes are 19 to 47 percent higher on four lane undivided streets — the altered proposal — than on two-lane streets with turn lanes, as is proposed. This update would be especially important for improving pedestrian safety and 420 people had signed a petition as of March 24 supporting the original 3rd Avenue redesign. Read more here: http://chn.ge/1pQGszp.

The Pedestrian Advisory Committees (PAC), which includes a group of Minneapolis residents and business owners who advise the city on related issues, has passed a resolution supporting the original proposal, as has the city’s Bicycle Advisory Committee.

“The PAC supports making the public realm more welcoming so the experience of walking is more pleasant,” Alquist said. Alquist pointed out the opportunity to “showcase our city and communicate what we value” on a street that includes the convention center, City Hall and destinations that draw visitors to our city and residents to downtown. The PAC is also seeking to widen the sidewalk next to the city hall, which is so narrow it’s difficult to walk two abreast.

Andy Coldwell, Land Use and Transportation Committee chair for the Sierra Club’s North Star Chapter said his organization supports the redesign, especially because it would encourage people to get outside in a green space and cater to those who would like to use bikes but are concerned about their safety in traffic when using on-street facilities.

“This feeds right into the city’s climate action plan by increasing walkability, bikeability and physical activity, and as a byproduct decreasing local pollution in the city center,” Coldwell said. The city’s Climate Action Plan calls for reducing emissions 30 percent from 2006 by 2025.

As a bicycle advocacy organization, the Minneapolis Bicycle Coalition supports the original proposal and the creation of a north-south bike route that is safe and convenient for riders of all abilities, but this project is about more than a bike facility. It is about transforming our downtown into a place that maximizes green and prioritizes the need for accessible and safe mobility while still allowing vehicles to travel efficiently.

Next month, the City Council will vote on the final layout. A planned vote on March 22 was delayed to allow more time for engagement and feedback on the final details.