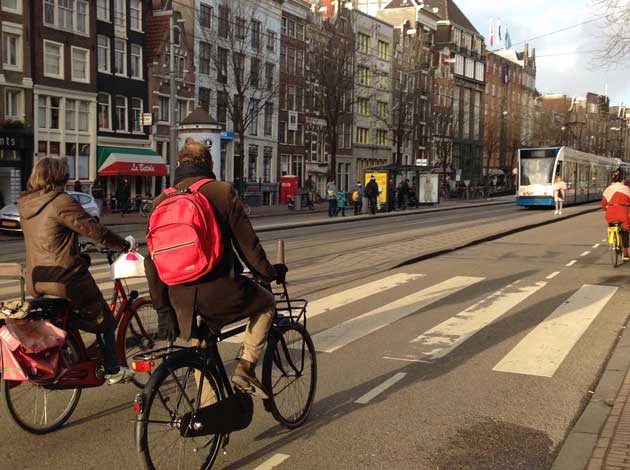 A complete street can take many different forms. Here’s one example of a complete street that includes protected bike lanes, transit and wide sidewalks. The new policy is not about accommodating every mode on every street but about planning complete networks for walking, biking and transit. Photo by Annie Van Cleve.

The Minneapolis City Council voted unanimously May 27 to adopt a Complete Streets Policy joining 30 other cities and counties in Minnesota and 900 around the country in an effort to prioritize mobility for all.

“Minneapolis is committed to rebalancing its transportation network by clearly prioritizing walking, taking transit and biking over driving motorized vehicles, in a manner that provides for acceptable levels of service for all modes,” the policy states. Read the full policy here: http://bit.ly/1WQQqOR

The policy acknowledges that a robust driving network exists in our city but that is not enough. It shifts resources toward building equally robust, safe, integrated and well-maintained networks for walking, biking and transit, thereby ensuring people who cannot drive because they are too young or too old, cannot afford the costs associated, do not have the physical or cognitive abilities to hold a driver’s license, can still participate in society.

People who live without cars or use cars infrequently often rely on a combination of these three modes. The U.S. Census Bureau reports 60,000 people walk, bike or take transit to work regularly in Minneapolis. Biking and walking are growing more quickly than another mode of transportation. There were 170 percent more bike commuters in 2014 than there were in 2000 and 30 percent more walking commuters. Minneapolis has the second most bike commuters of any city in the United States.

“The Minneapolis Complete Streets policy has been a top priority of the Bicycle Advisory Committee (BAC) for more than six years. It took longer than all of the partners expected, but the end result is worth it. We now have one of the best and strongest Complete Streets policies in the country,” said Nick Mason, chair of the Minneapolis Bicycle Advisory Committee and deputy director of the Bicycle Alliance of Minnesota.

Indeed a diverse range of partners came together to advocate for this policy. AARP­-Minnesota views the policy as a vehicle for making sure streets are truly accessible to older adults who wish to age in place.

“Seventy-eight percent of people over the age of 45 say their current community is where they will always live. This is where they have strong social networks and sense of community,” said William Phillips, state director of AARP-Minnesota.

As baby boomers age and millennials begin to have children, a greater percentage of our population must rely on walking or bicycling in order to travel independently. Yet, traffic crash statistics show safety could be greatly improved. Seven people were killed and 4,225 people injured in 11,118 reported crashes on Minneapolis streets in 2014, according to the Minnesota Department of Public Safety.

“One thing we focus on is creating an environment where people can make a choice to be physically active. It’s not a choice if it’s not safe to go for a walk or safe to bike to work. To give real choice, we need Complete Streets,” said Rachel Callanan, Regional Vice-President of the American Heart Association (AHA). The AHA supported the policy because it aligns with their preventative priorities: promoting physical active and healthy eating.

Callanan also pointed out this policy offers great opportunity to begin addressing some of the inequities at play in our city through developing new high-quality public space in parts of the city that have suffered from disinvestment.

What makes this policy so exciting is the fact that it acknowledges walking, biking and transit are as important as driving and it provides a framework for planning infrastructure that makes these modes accessible. Even more exciting, the city has dedicated $22 million per year in additional funding for street maintenance.

One important street currently being redesigned is Hennepin Avenue in downtown. The City Council recently unanimously approved a concept for reconstructing Hennepin and will apply for federal funding needed to complete the project. The concept features protected bike lanes, intersection improvements, redesigned sidewalks, improved bus stops and other people-friendly features that should become standard as the Complete Streets policy begins to have impact.

There will be further opportunities to provide feedback about Hennepin Avenue next year. You can keep up on the project through the Minneapolis Bicycle Coalition or sign-up for email updates from the city on the project page (link: http://www.minneapolismn.gov/cip/future/WCMSP-172270).

In the meantime, start dreaming about the possibilities for improving other important corridors of our city during Open Streets. The Downtown Open Street even will take place on 1st Avenue North and Washington Avenue North on Sunday, July 10.