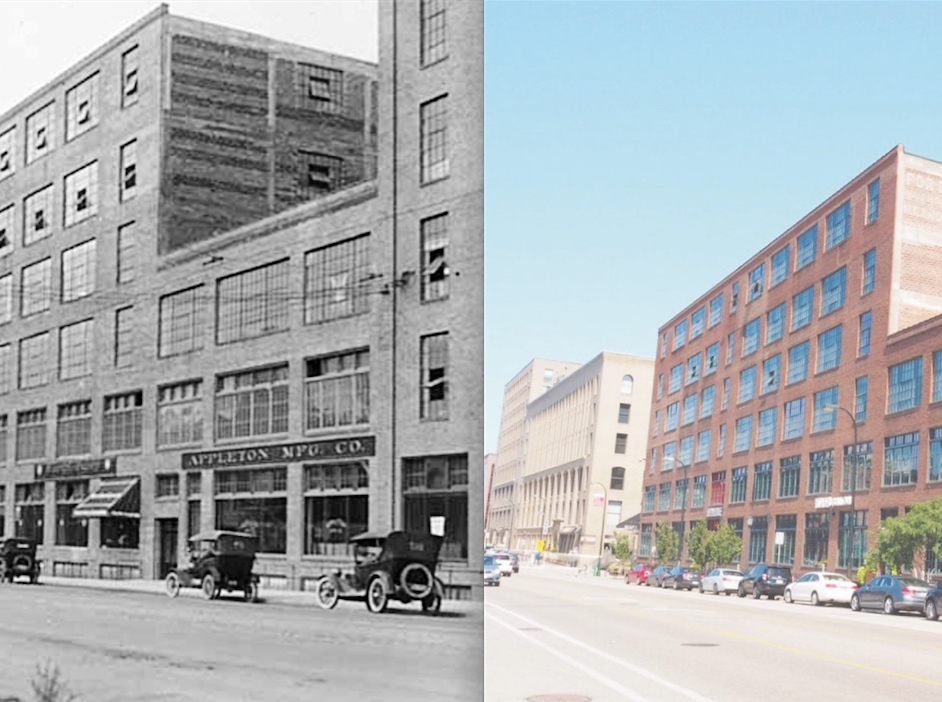 Washington Avenue was as bustling in the 1920s as it is today. Photo by Linda Koutsky

Named for a trolley line that served the area in the late 1800s, the North Loop is the heart of commercial Minneapolis, and it’s thriving. Converted warehouses, cast-iron storefronts, repurposed loading docks, worn painted signs, a quaint steel bridge, chic shopping, award-winning restaurants — it’s like our own Greenwich Village.

Minneapolis became a major distribution and wholesale center for the Upper Midwest — and further. According to the City of Minneapolis’s web site, between 1880 and 1907, the wholesale trade originating from the Warehouse District grew to $280 million from $24 million. In 1919, it reached the $1 billion mark.

Many of the North Loop’s buildings remained unaltered over time. Together they create the Minneapolis Warehouse Historic District. To learn more about the buildings, read Larry Millet’s “AIA Guide to the Twin Cities,” or visit here.

Here are a few of my favorites:

Designed by Dunnell & Elliott architects in 1885, this building was the epicenter of horse-drawn and electric transportation in Minneapolis. Horses were kept in stables right in the building, and on-site paint and woodworking shops kept the streetcars in working condition.

A limestone commercial building designed by Joseph Haley in 1886 for a farm implement wholesaler, it has a three-story addition by Kees and Colburn added in 1925. The building was also used as a baking and warehouse facility for National Biscuit Company.

Architect Harry Wild Jones designed this building in 1895, about a decade earlier than his massive Butler Brothers Warehouse (Butler Square). Lindsay Brothers sold implements and plumbing and heating supplies and claimed to be the largest independent farm implement wholesaler in the United States.

Influenced by the architecture of H. H. Richardson, this warehouse for a binder, mower and reaper company was designed by Long & Kees in 1896. Mother’s Macaroni purchased the building in 1916. In addition to their own products, they made a quick-cooking elbow macaroni for Minneapolis grocer James T. Williams. His product, Creamette, grew to be so popular that he took over the company.

Designed by architects Kees & Colburn in 1902, this distinctive building has a Louis Sullivan-esque arched entrance with terra cotta ornaments, including two prominent deer heads. Deere-Webber Company was an offshoot of John Deere & Company. Giant elevators in the building were used to move grain harvesters.

Ford started manufacturing cars in Minneapolis in 1912 then hired Kees & Colburn a couple years later to build a more efficient, vertical assembly plant. Working from the top floor down, Model Ts were put together piece by piece until they reached the first floor and were then driven onto awaiting rail cars. Four hundred cars a day were assembled there until Ford moved to its St. Paul location in 1923.

Designed by Long & Thorsov in 1922, this Neo-Classical Revival-style building was home to the LaVoris Company. Founded by two Minneapolis druggists, LaVoris was first used as an antiseptic in the Civil War and then became a popular mouthwash.

HAPPY HOUR TIPS: Two of the oldest drinking and dining establishments in Minneapolis are in the North Loop: the Monte Carlo (219 3rd Ave. N.) and Clubhouse Jäger (923 Washington Ave. N.) were both established in 1906.