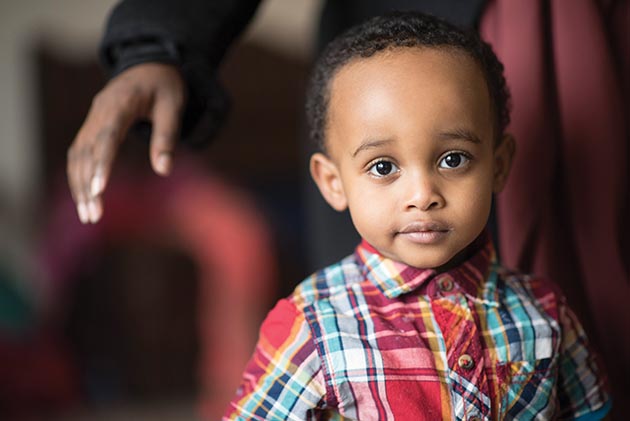 Currently, more than 2,000 families are in affordable housing they found with the assistance of Aeon. Submitted photo by Scott Streble

When his mother was diagnosed with breast cancer, Eddie Chambers quit his job as a Minnesota state trooper to take care of her. Five months later, he found himself homeless.

After a time spent living in a friend’s garage, Chambers — who served as a lieutenant in the Marine Corps for four years during the Persian Gulf War — wound up in a shelter for about six months. There, he met a man who asked for his help filling out a housing application for Aeon, an organization that provides affordable housing to low-income and homeless people in the Twin Cities metro area.

“He said, ‘Eddie, you’re filling out mine, why don’t you go apply for a place?’” Chambers said. “I thought, why not?”

Two weeks later, he received a call from Aeon, and within six months, he had keys for his new apartment in hand.

Aeon was founded by a group of community organizations in 1986 as the Central Community Housing Trust to address the need for affordable housing after 350 units were demolished to build the Minneapolis Convention Center.

The need for affordable housing is as great today as it was then.

Minnesota is one of the least affordable states for renters in the Midwest. Since 2000, the average rent in the metro area has gone up 7 percent, while the median renter income has fallen 17 percent. More than 14,000 adults and children are homeless on any given night in Minnesota, and data shows that minimum wage earners aren’t able to afford rising rents, leaving many without a home.

Over the past 30 years, Aeon has gone a long way in making an impact on homelessness and affordable housing in the Twin Cities. It currently houses more than 4,500 residents, including 2,153 families, 522 formerly homeless people and 200 seniors.

Aeon’s 42 buildings — some renovated from existing buildings, others built from the ground up — were purchased through the Low-Income Housing Tax Credit, a government-funded incentive for affordable housing investments. While most of Aeon’s properties are located in Minneapolis, the organization also has housing developments in St. Paul, Roseville, Chaska, Columbia Heights and Brooklyn Center, with more in the works.

Ten years ago, it added a philanthropic arm to fund its Resident Connections and Supportive Services departments through individual and corporate contributions. They provide vital resources to Aeon’s residents, who often are faced with significant barriers — including mental health, nutrition and food, job placement, technology, budgeting, legal and financial and transportation challenges — that may prevent them from remaining in stable housing.

“Our tagline is, ‘Home is everything,’ and we truly believe that,” said Scott Redd, Aeon’s vice president of Resident Connections and Supportive Services. “We know that if folks don’t have a stable home they’re not likely to get a good job, and they’re not likely to have good health because they’re buying food they have to consume right away instead of fresh produce.”

The biggest source of Aeon’s contributed revenue comes from Beyond Bricks and Mortars, its annual breakfast fundraiser held in May. Its 2016 event, which features residents telling their life-changing stories illustrating Aeon’s impact, raised $538,883.

As it moves forward, Aeon is increasingly dedicated to serving those facing the greatest barriers when it comes to housing: Minnesota’s homeless population.

“There are other groups that provide affordable housing, but they do it for folks who are earning between 50 to 90 percent of the area median income,” said Eric Schnell, Aeon’s chief operating officer. “We’re really committed to providing the opportunities for homes to people who are at 30 percent or less, including people who are coming out of homelessness, and there are some real challenges with that.”

‘When people get a home, it changes their whole life’

Chambers’ studio apartment, located inside a vintage brownstone in the Stevens Square neighborhood of Minneapolis, is cozy but tidy. With its spacious kitchen and bathroom, two walk-in closets, updated appliances, new windows and great view of the downtown skyline, it looks like your regular, run-of-the-mill apartment.

“This doesn’t look like affordable housing,” Chambers said. “You wouldn’t know it by looking at it. Not, ‘That’s the ’hood, that’s the projects.’ That’s the beauty of it—it takes away the stigma.”

Chambers — who is unable to work due to back injuries sustained from two car accidents and relies on government assistance — served on Aeon’s board for nearly a decade. At least a third of the board of 18 directors is comprised of residents of low-income neighborhoods or low-income people, 60 percent is comprised of members of the organization and at least three directors are residents of Aeon.

“I was like a sponge,” he said of his decision to join the board. “I wanted to know anything and everything I could about this organization, because they gave me a shot.”

Aeon’s impact goes beyond those facing homelessness to benefit the community as a whole.

“If you’re homeless with nothing and you’re hungry, what are you going to do? Just go lie quietly in the corner and die?” explained Chambers. “No, you’re going to survive. So crime goes up. Without Aeon, where would people be? They’d be out on the streets.”

He added, “I’m convinced when people get a home, it changes their whole life, because now they’ve got something they can call their own.”

— Donate through a recurring donation or pledge payment, or join the Cornerstone Society, whose members pledge at least $1,000 a year for five years.

— Participate in Aeon’s Share-a-Meal volunteer meal service, in which volunteers cook, serve and eat a meal with Aeon’s residents.

2,153 — Total number of families living in homes provided by Aeon and its partners in 2015