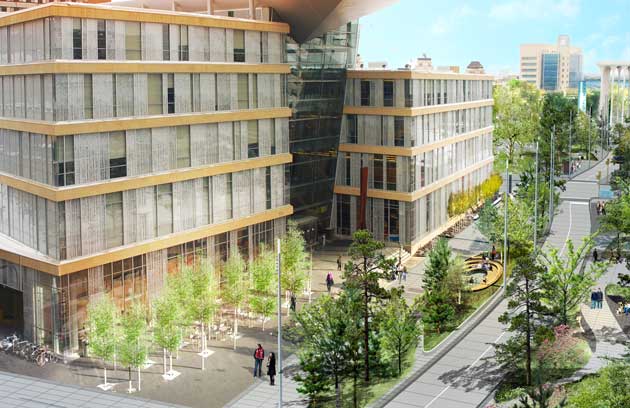 An illustration of the future Nicollet Mall. Submitted image

It’s more than potholes that are getting filled during this summer’s construction season.

In addition to regularly scheduled street repairs and reconstructions, new development — especially in Downtown East around the new U.S. Bank Stadium — is providing opportunity to make improvements to our downtown streets.

“We’re moving toward a vision of a Protected Bikeway Network that connects with neighborhoods,” said Matthew Dyrdahl, the city’s Bicycle and Pedestrian Coordinator.

Here’s an update on what people who ride bikes can look forward to once the dust settles downtown.

— Washington Avenue is being reconstructed between Hennepin Avenue and 5th Avenue South. When the project is complete in 2017, it will feature a protected bike lane raised to sidewalk level to avoid conflict between cars and bikes. In a separate but related project, a new 35W on-ramp at 4th Street will also be built in the near future, which will help alleviate some of the congestion on Washington Avenue.

— Hennepin-Lyndale Avenues are being reconstructed between Franklin Avenue and Dunwoody Boulevard. On the west side, there will be sidewalk improvements and on the east side trail and sidewalk improvements. Intersections will also be improved, and a new crosswalk will be added on the northside of the Groveland intersection. New street lighting, expanded boulevards and new landscaping are other improvements that will enhance the experience of pedestrians and cyclists. The project is expected to be fully open to traffic in December of this year.

— Nicollet Mall is being redesigned. When it reopens in fall 2017, it will feature more green space, especially at the two ends of the street near Loring Park on the south and the Mississippi River on the north. Nicollet will continue to function as a multimodal street with buses and cyclists sharing space. Lots of new public spaces along the street will be especially attractive to pedestrians.

— Third Avenue South is being redesigned between 1st Street South and 16th Street East. The redesigned street will feature a protected bikeway when construction is completed in 2017.

— Protected bike lanes raised to sidewalk level are being built on Park and Portland Avenues. One block has already been completed between 3rd and 4th Streets South on Park Avenue. Improvements on Park and Portland are the result of coordination between the city and private developers. As new buildings go up, developers are contributing to pedestrian and cyclist improvements outlined in a Pedestrian Realm Augmentation plan created by the city. Drydahl said this is a new approach that was specifically developed to take advantage of the opportunity associated with so much new development. Other improvements outlined in the plan focus on improving and expanding space for people, through shortening street crossings for pedestrians and other measures.

There is a lot for cyclists to look forward to using in the near future. Visit the Minneapolis Bicycle Coalition’s website (mplsbike.org) to learn more about these projects and ways to get involved.