Dominium has unveiled its vision for the Duffey Paper buildings along Washington Avenue in the North Loop. The Plymouth-based developer is planning to renovate and convert the three warehouse buildings, including one mid-rise building and two smaller ones, between 5th and 6th avenues into about 200 units of affordable housing. Nick Anderson, vice president and project partner, said they’ll likely close on the sale of the buildings next summer and could break ground soon after. The project, currently referred to as Iron Store for the main building’s original use, would have a wide range of affordability with rents as low as 30 percent or less of the area median income or as high as 80 percent, Anderson said, which would put them at $500–$2,000. Dominium is seeking state and federal historic tax credits and affordable housing tax credits. 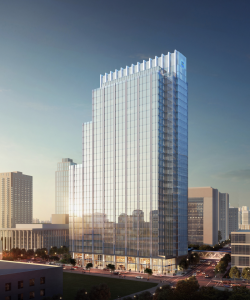 United Properties has submitted a new vision for its Gateway tower proposal, now a 30-story tower without a hotel and more than 790,000 square feet of office space anchored by RBC Wealth Management. The 458-foot tower, which would technically be 36 stories under the city’s zoning code, would feature 23,000 square feet of retail and restaurant space split between the main and skyway levels and approximately 500 parking spaces on three underground parking levels, according to preliminary plans submitted to the City Planning Commission Committee of the Whole. The Minneapolis-based developer plans to connect it to the skyway via the Minneapolis Central Library and possibly Marquette Plaza. The tower site, the former Nicollet Hotel Block on the north end of Nicollet Mall, would have an outdoor plaza and a terrace on its podium. 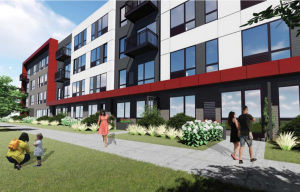 Yellow Tree Corp. is proposing a 65-unit apartment building in the Holland neighborhood of Northeast Minneapolis. The Minneapolis-based developer is planning to build the four-story building on a vacant lot at 24th & Jackson, according to plans submitted to the City Planning Commission for its July 30 meeting. The first floor will have 32 enclosed parking spaces and six residential units with walk-up entrances. The second and third floors will have 20 units each, and the fourth will have 19 units and an amenity deck. The building, clad with brick, fiber cement and metal panel, would have a mix of studio, one-bedroom and two-bedroom units. The project as proposed will require rezoning the site from R4 to R5, or a medium-density multi-family district to high density, and variances for setbacks, the maximum lot coverage and maximum impervious surface coverage.

The Opus Group now has control of the remaining 1.5 acres of the Ritz Block, a site on the north end of Nicollet Mall where it is finishing work on the 30-story 365 Nicollet luxury apartment tower. “Opus has acquired the remainder of the land next to 365 Nicollet known as Ritz Block for a future development. It’s a continued pleasure to work with the city of Minneapolis and the downtown community in support the city’s vision to double the downtown population by 2025,” said Opus Vice President and General Manager Matt Rauenhorst in a statement, hinting at what could be another residential project on top of the developer’s Nic on Fifth, 4Marq and 365 Nicollet apartment towers. 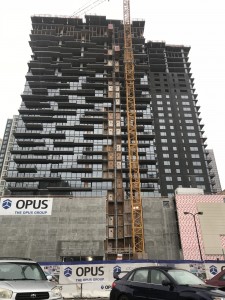 The first residents of 365 Nicollet are now able to move into the 30-story luxury apartment tower on the southern portion of the Ritz Block, a block on the north end of Nicollet Mall between 3rd and 4th streets. Opus Vice President and General Manager Matt Rauenhorst said work on the building will wrap up this fall. Amenities include a24-hour concierge service, a dog spa and run, a fitness studio and a terrace with a pool, outdoor theater and gaming lawn.

Schafer Richardson’s parking ramp in the North Loop is now open. Director of Development Maureen Michalski said the 349-stall ramp is used mostly for contract parking, which will free up sites in the neighborhood so the Minneapolis-based developer can build housing. Interstate Parking manages the parking, including some hourly parking open to the public. Schafer Richardson plans to build 104 units of affordable housing across the street at the former Zuccaro’s Produce site, a project known as The Redwell. The developer is replacing part of a surface parking lot along 3rd Street with an approximately 139-unit market-rate apartment building, which Michalski said they plan to break ground on by January 2019.

JR Hospitality and Hawkeye Hotels are making progress on approvals for two hotel projects totaling 215 rooms. The projects, proposed for a surface parking lot on the west side of downtown, had its plat approved by the City Planning Commission July 30. The lot stretches along Hawthorne and Currie avenues between 10th and 11th streets. Fairfield Inn and Suits, located toward 11th Street North, would be six stories and have 100 rooms. The Cambria Hotel, located on the 10th Street North side of the site, would be six stories and 115 rooms. The proposal features no parking, but the hotels would have valet service, according to the plans. The hotels would be built next to each other and share a passenger loading zone.

Carvana, an online used car marketplace, is proposing a “hub” site in Northeast Minneapolis to facilitate delivery of local online car purchases. The Arizona-based startup has submitted plans to the City Planning Commission for the delivery site, which under the zoning code is defined as a motor freight terminal. Cars on the site, located on the north end of the Mid-City Industrial neighborhood, may be stored for up to 48 hours, according to the proposal. The property is vacant and most recently used for commercial truck sales.

Developer Daniel Oberpriller has reworked the design of a new apartment building in the Marcy-Holmes neighborhood where he’s planning a three-part project that would change the look of 8th Street. North Bay Cos. is proposing a five-story apartment building at 8th & 6th that would have about 51 studio and one-bedroom units ranging from about 400–800 square feet. The building, designed by DJR Architecture, would have a bike storage room, a fitness studio and 17 enclosed parking spaces on the ground floor, according to revised plans that the Marcy-Holmes Neighborhood Association’s Land Use Committee will review in early August. An additional six stalls would be located outside near a dog run.

Schafer Richardson has completed its part in renovating the former Weather-Rite building for new office and commercial tenants. Work has begun on tenant improvements, said Director of Development Maureen Michalski. About 7,000 of the 56,000 square feet available is leased, she said. The project has attracted Number 12 Cider, which is currently building a commercial brewing facility and taproom in the project.