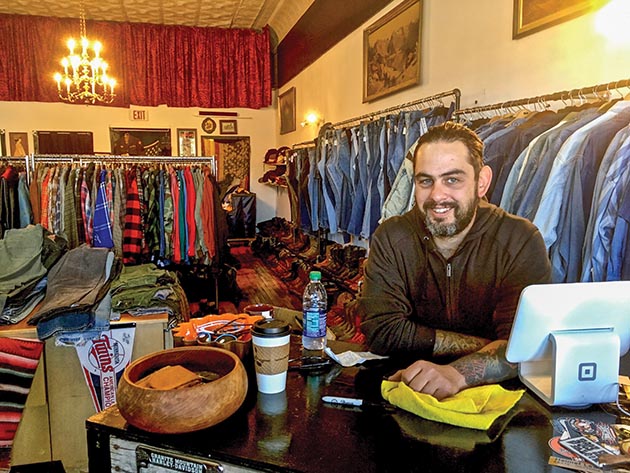 Eric Swenson stands behind the counter at his new Northeast vintage goods shop, The Cat and the Cobra. Photo by Brian Lambert

When you open a store with a name like The Cat and the Cobra, you have to be prepared for the questions.

“You know I don’t even know,” he said. “It just kind of came up when my girlfriend and I were kicking around names for the place. One day we just hit on The Cat and the Cobra and said, ‘Hey, that’s good. Let’s go with that.’”

(There was ​an obscure Les Savy Fav album​ by the same name.)

Well, alrighty then. At least “cat” and “cobra” are actual real words, unlike “Accenture” or some other entirely invented, research-tested brand name. Not that Swenson, 34, and girlfriend Casey Henricksen, 23, are posing any great threat to the world’s corporate titans.

“And before that there was a psychic reader in here for a few years,” says Swenson. “I’m not sure what happened to that one.”

What he knows for sure is that The Cat and the Cobra is “an entirely new business,” certainly for Henricksen and him, and one that intends to carve out a pretty specific niche in the not exactly underserved vintage clothing and accessories marketplace.

After years selling construction signage for big name companies and “traveling all over the place,” Swenson had had enough.

“I knew I didn’t want to work for the man anymore,” he said.

What he decided was he wanted to work for himself.

After asking himself what he most enjoyed and what he was good at, he said, “I realized I had kind of a knack for hunting for things.

“As a hobby I had been involved in rebuilding old Harley-Davidson motorcycles, which meant a lot of time making contacts around the country for old parts — or parts, I should say — to get older bikes back running. In traveling around for my old job I met a lot of people who loved everything about the Harley culture, which besides the bikes themselves means old t-shirts, denim and leather jackets and all the other stuff that comes with Harley. Which is ​a lot.​”

So the small-ish store on Central — 800–1,000 square feet — is pretty significantly devoted to used and vintage Harley-Davidson related gear, with an emphasis on a lot of funky, well-aged T-shirts, weathered enough to make every semi-retired dentist look like a bona fide ornery bandito on his ride to Sturgis. Or the mall.

The collection of nicely worn boots is pretty impressive, too. Swenson said one of his contacts was a wife cleaning out her deceased husband’s truly Imelda Marcos-like collection of dozens of high quality leather boots. (Size 10 to 10 1⁄2, if you need to know.)

“It wasn’t just the Harley thing, which I really enjoy — and really is huge in terms of the amount of gear and accessories the company has put out over the years — it was also the idea that almost all this stuff is American-made,” he said. “That’s been a big part of their brand, at least until recently, and I kind of like that, and so do a lot of other people. So it’s kind of something we sell, American-made. It’s kind of a lost art.”

While many people have had the experience of either cleaning out their own closets or the closet of a parent who has passed away, then hauling the “vintage” gear around town to one of the many used-clothing stores, Swenson is quick to emphasize that funky old dresses, blouses and dad’s not-so-hip-anymore white loafers are not what The Cat and the Cobra is looking for.

“We’re really trying to focus on the unisex thing, because that’s kind of what Harley has done,” Swenson said. “I mean, my girlfriend likes to wear a lot of the same clothes I do. They’re comfortable and sturdy.

“So if somebody comes in with something unique, we may buy it. But we’re really trying to avoid being your typical antique store.”

He said the shop’s “real focus is on cool old Harley T-shirts,” the flow of which is directly related to all the contacts Swenson has made while out hunting for parts. Not that’s he’s revealing exactly from whom or where.

“Yeah, that’s kind of my secret,” he said. “All those contacts is how this place remains unique, I hope.”

And in case you’re wondering, Harley-Davidson is cool with this sort of thing. The Harley accessory aftermarket, if you will — stuff that fans have handed down, traded or sold — is so enormous no company could keep up with it or try to claw back a slice of the profits.

“It’s like buying a car from Ford,” Swenson said. “Once you buy it, it’s yours, and you can do whatever you want with it.

“But you will get the cease-and-desist letter if you start printing new stuff with Harley’s logo on it. That’s a no-no.”