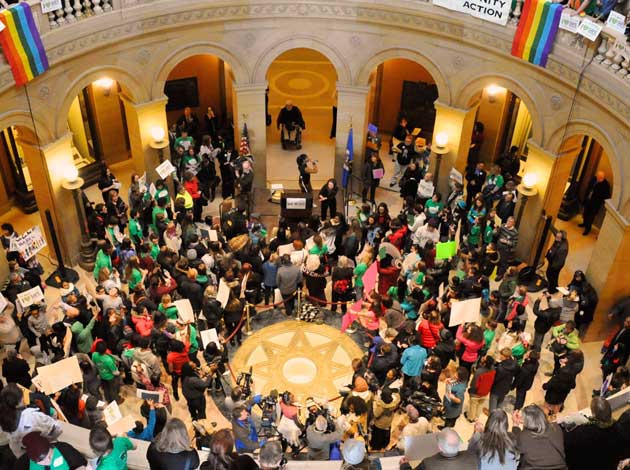 : Hundreds of students from across the state attended OutFront Minnesota’s rally in the Capitol rotunda in 2014. Photo by Anne Hodson

OutFront Minnesota is a leader in the fight for equality

Evan Thomas was born female but knew he was male by the time he got to preschool.

The 64-year-old St. Paul resident transitioned a few years ago but could not undergo surgery because his state-funded Medical Assistance does not cover it. Thomas connected with Phil Duran, legal director of OutFront Minnesota, which joined him in a lawsuit challenging the state’s ban on transition-related surgery for public health care programs.

“He really worked his tail off to make sure this happened,” Thomas said of Duran. “It’s just a great organization.”

For nearly 30 years, OutFront Minnesota has advocated for the LGBTQ community, operating a crisis line, connecting people with resources and advocating at the state Capitol. The nonprofit played a key role in defeating a proposed state constitutional amendment to ban same-sex marriage in 2012 and more recently helped strengthen the state’s anti-bullying law.

“So many people still, they feel like there’s something wrong with being who they are,” said Monica Meyer, OutFront executive director. “Our society loses so much by having people have to feel that way.”

OutFront Minnesota began in 1987 with the intent of becoming a central organizing point for the state’s gay and lesbian community, said Ann DeGroot, the organization’s founding director. She said a major focus in the early years was helping people come out in a safe space, noting that society wasn’t as accepting of LGBTQ people when the organization got its start.

“The idea was to get ourselves to put a face to the issue,” DeGroot said. “We were kind of a mystery to a lot of people.”

The nonprofit began working to secure domestic-partner benefits for gay and lesbian couples and began establishing safe spaces for students at schools and colleges. It also led a campaign to amend the Minnesota Human Rights Act to ban discrimination against LGBTQ people in areas such as education, employment, public services and public accommodations. Gov. Arne Carlson signed the bill in 1993.

In 2003, the organization began its nearly 10-year fight against a proposed constitutional amendment to ban gay marriage. OutFront Minnesota fought off the amendment until 2011, when the Legislature decided to bring it to voters.

Meyer said OutFront Minnesota saw the vote as a chance to mobilize thousands of Minnesotans in support of same-sex marriage, an opportunity the organization could not have produced on its own. OutFront Minnesota teamed with Project 515 to form Minnesotans United for All Families, the main campaign working to defeat the amendment.

More than 700 organizations across Minnesota signed onto their coalition, as did tens of thousands of volunteers and donors.

“It was the campaign that caught people’s hearts,” Meyer said. “People felt really good about being involved.”

The grassroots efforts paid off, as 52.8 percent of Minnesota voters rejected the amendment in November 2012. The Legislature voted to legalize same-sex marriage in 2013.

OutFront Minnesota next worked on passing a stronger anti-bullying law in Minnesota. The state had one of the weakest anti-bullying laws in the country at the time, Meyer said. She added that the organization wanted a law requiring schools to say they were against bullying and intimidation of all groups in the Human Rights Act.

“In some ways, it was more difficult than marriage,” Meyer said of the bill, adding that the opposition argued that such a law would corrupt kids. “It was really the underlying current against all of it.”

Since then, OutFront has developed a full Safe Schools program and also has a youth-leadership council. It also manages a statewide gender and sexuality alliance that includes more than 90 schools and hosts an annual youth summit.

DeGroot, who left OutFront in 2008, said she never could have envisioned that gay marriage would become legal when she helped found the organization. She said she’s optimistic that the climate will continue to improve for the LGBTQ community, noting the increasing societal awareness and recognition.

Duran, the legal director, said he expects there to be more discussion in the future around bisexual and transgender issues. He expected, however, that some politicians will continue to try and undo protections for the LGBTQ community, something that requires constant vigilance.

“We can’t take for granted the things we secured,” he said.

— 700: Number of organizations and business involved in the Minnesotans United for All Families coalition, which was spearheaded by OutFront Minnesota.

— 70,000: Approximate number of donors to the Minnesotans United for All Families campaign.

What you can do:

— The organization looks for volunteers to help with events, anti-violence advocacy and more.

— Learn more about LGBTQ issues by having an OutFront Minnesota speaker come to your workplace or school.

— Attend one of OutFront Minnesota’s annual community events, such as its annual gala or Twin Cities Pride.

About the Where We Live project

This project is an ongoing series spearheaded by Journals’ publisher Janis Hall showcasing Minneapolis nonprofits doing important work in the community. The editorial team has selected organizations to spotlight. Nate Gotlieb is the writer for the project.