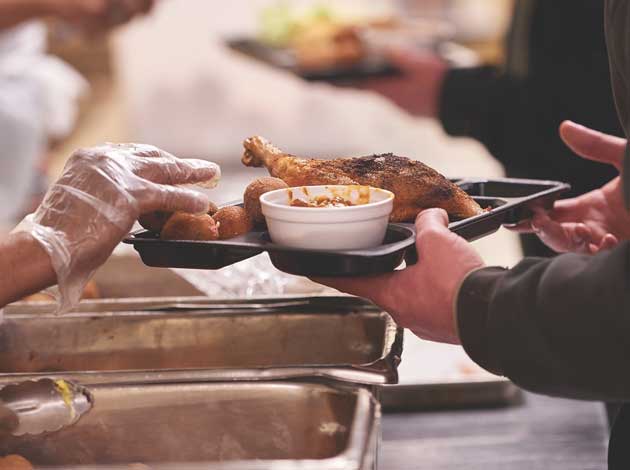 Melvin Lewis worked for more than 20 years as a professional bill collector, a job that took an emotional toll on him.

He started hanging around the wrong people, he said, began using crack cocaine and marijuana and was homeless for five months.

“I knew God had something better for me, and I knew it was time to turn around my life,” said Lewis, a Chicago native.

A church in Florida paid for Lewis to bus back to Minnesota, where he enrolled in House of Charity’s outpatient chemical dependency program. He completed the program in April 2014, found an apartment through the nonprofit and started school to become certified as a community health worker.

Recently, the 52-year-old Lewis, who is now sober, was hired as a customer-experience representative at U.S. Bank Stadium as he finishes his education.

“Over the course of a couple of years, I’ve been given my freedom (and) my independence,” Lewis said. “You really value what you’ve been blessed with.”

For about 60 years, House of Charity has fed, housed and provided support services to people experiencing homelessness, hunger, substance abuse and mental health. The nonprofit housed about 500 clients in 2015 and served more than 130,000 meals at no cost in its food center.

House of Charity began in the early 1950s, when founder Tom Kondrak, better known as Brother de Paul, began providing food and shelter to the poor in Minneapolis. The organization started on Nicollet Island and moved around several downtown sites before settling in 1976 in an old hotel on 8th Street.

House of Charity was mainly focused on food during its Nicollet Island days, executive director Bert Winkel said, but has expanded to accommodate more basic needs. That includes providing permanent housing to about 140 clients through its Housing First program.

The program works with people experiencing long-term homelessness to help them find an apartment and sign a lease. House of Charity gives all Housing First clients a case manager who helps them find food banks, job interviews and other services.

“Once we can help a client become stabilized, then more than likely the other things get started to be worked on,” Winkel said.

Housing First is a national program, and House of Charity is one of nine providers of it in Hennepin County. Eighty percent of people served through the House of Charity program remained housed after one year at the end of 2015, and 8 percent were able to move into independently leased apartments.

More than 1,600 people experience homelessness in Hennepin County on any given night, according to the 2015 Wilder Foundation Homelessness Survey. The reasons for homelessness vary from loss of a job, divorce, domestic abuse, mental illness and addiction, among other things, said Housing First program manager Evelyn Combs.

Combs, who was homeless herself at one point, said help can be a hard thing for which to ask. House of Charity’s staff, she said, try to reinforce that it’s OK to ask for help.

“Everybody needs help,” she said. “It’s just a matter of what it is.”

That was especially the case during the Great Recession, when House of Charity nearly tripled its staff to accommodate the additional people in need.

Winkel said House of Charity’s clientele felt the effects of the recession first and are slower to recover. A lot of people are still struggling, he said, noting that many people still utilize the food center.

The nonprofit has embarked on an effort to expand, purchasing in May 2015 the land adjacent to its food center. It plans on building a five-story building with 65 units for people experiencing long-term homelessness, an expanded addiction and mental illness treatment facility and a new food center, among other upgrades.

The organization is looking to raise $23 million for the project, including $5 million in private capital.

The building will benefit people such as Lewis, who credits House of Charity with helping turn his life around.

“It gave me hope, a lot of hope, that I can do better,” he said. “This is a powerful program. … They really do try to help you.”

— 1,618: People experiencing homelessness in Hennepin County on any given night, according to the 2015 Wilder Foundation Homelessness Survey.

— Donate online, through a matching gift program or with an in-kind donation at houseofcharity.org.

— Join the Founder’s Society, make a tribute gift or hold a fundraising event.

— Contact the organization’s Volunteer and Outreach Services Director to find out about volunteering in the food center.

About the Where We Live project

This project is an ongoing series spearheaded by Journals’ publisher Janis Hall showcasing Minneapolis nonprofits doing important work in the community. The editorial team has selected organizations to spotlight. Nate Gotlieb is the writer for the project.