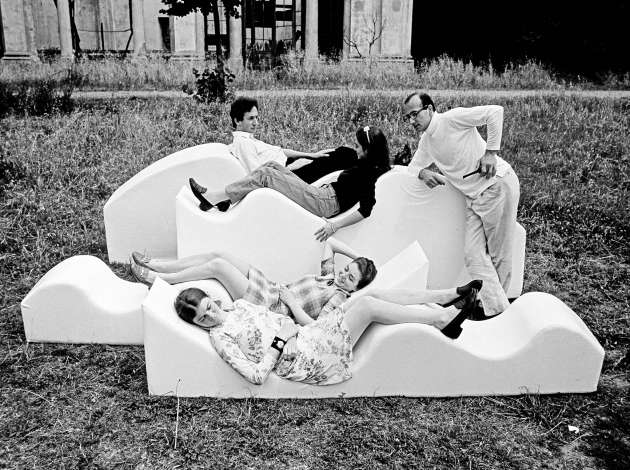 LOWRY HILL — Pick up the exhibition catalogue for “Hippie Modernism: The Struggle for Utopia” and you’ll see the photo, there, on the cover: A huge geodesic sphere designed by Buckminster Fuller is in flames, sending a thick plume of black smoke into the air above Montreal’s riverfront.

Quite an apt metaphor for the hippie era’s mid-’70s flameout, isn’t it?

That 20-story soccer ball on an island in the Saint Lawrence River was the U.S. pavilion during Expo 67, the world’s fair Montreal hosted at the countercultural movement’s apogee (which happened to coincide with Canada’s centennial). It caught fire from a welder’s torch in 1976, and the dome’s clear acrylic shell went up in smoke — not unlike the dilated-pupil idealism of the 1960s.

Not that you’d catch a whiff of smoldering plastic in the galleries at the Walker Art Center. Curator Andrew Blauvelt offers up a pharmacopeia of aesthetic highs — from retro-futuristic furniture to liquid light shows to a generous sampling of the era’s radical print culture — but rarely hints at the cultural hangover that followed the flower children’s delirious moment in the sun.

But, wait just one second. Look around. Environmentalism is no longer a fringe movement. Renewable energy is on the rise. Gay marriage is the law of the land, and a majority of Americans think marijuana should be legal, too. After a decades-long pause in research, there’s renewed interest in the therapeutic uses of psychedelics.

Sounds like a hippie paradise, doesn’t it? In bypassing the cultural tug-of-war over the hippie legacy, Blauvelt draws a straight line from then to now.

“Even though (“Hippie Modernism”) is about the past, it’s really about today and the future,” he said.

Calling someone a “hippie” remains a slur in some quarters, and Blauvelt was careful to note not all of the artists in the exhibition qualify. But he said all of the works embrace the core tenets of modernism: blending artistic practices, embracing experimentation and incorporating art into everyday life.

Blauvelt sets his starting point in 1964, the year Ken Kesey and his LSD-addled Merry Pranksters launched the cross-country road trip chronicled in “The Electric Kool-Aid Acid Test.” Indeed, Kesey’s exhortation to “turn on, tune in, drop out,” becomes an organizing principal for the show.

Blauvelt closes the window in 1974, in the middle of the OAPEC oil embargo. He said it marked “the end of post-scarcity thinking,” a cold splash of water on Baby Boomers’ fantasy of unending abundance.

Not that there’s anything wrong with dreaming, and the “turn on” section of “Hippie Modernism” tracks artists’ attempts to achieve spiritual transcendence, often with the aid of drugs, technology or both. Both Isaac Abrams’ DMT-induced quasi-Pointillist painting and a pair of mossy watercolors produced by Judith Williams under the influence of LSD seem unfocused — unsurprisingly, considering the circumstances — while the precision Ettore Sottsass’ sci-fi architectural drawings allows the viewer to share in his weird visions, not just gape and wonder.

Haus-Rucker-Co. of Vienna practiced their own brand of architectural and technological utopianism, building inflatable environments and bug-eyed helmets designed to ensconce the wearer in biofeedback. The group’s “Mind Expander 2” elaborated the helmet design into an enclosure built for two; actually, it’s constructed with roughly one and one-third seats, so that the female member of a couple is draped across the male’s lap.

“They had other, hidden agendas,” Blauvelt observed.

That “free love” was often a cover for run-of-the-mill male chauvinism should surprise no one.

Devotees of visual culture will want to linger in the sumptuous “tune in” section of the show, its walls lined with trippy gig posters by the masters of psychedelic design, including Bonnie MacLean, Wes Wilson and Victor Moscoso. Speaking of Moscoso, a member of the Zap Comix crew: Why do we see a collection of OZ magazines and Whole Earth Catalogs but no underground comics, a hallmark of the hippie experience?

Ah, but there is one comic: The original crayon-and-pencil drawings for issue no. 1 of “Being Bag,” a kind of proto-underground produced in 1965 by members of the Drop City artists commune. Its creators were reading Marvel superhero comics at the time, and were especially taken with Steve Ditko-era “Dr. Strange,” explained Clark Richert, a member of the collective who was looking over the pages recently with Ed Heinz, another Drop City veteran.

Artifacts from Drop City dominate the “drop out” section of the show, including a half-zonohedron dome housing a spinning painting designed to be viewed under strobe lights. As far out as that sounds, Richert said they thought of themselves as an artists commune, not a bunch of hippies grooving in Colorado’s high desert.

Heinz said Drop City splintered in the early ’70s for fairly mundane reasons. Hangers-on became a distraction. The collective’s members matured. They formed relationships, had children and needed to make money. (“Being Bag” was an early and unsuccessful attempt at generating an income.)

“We lost our focus during that time,” Heinz said.

It was a grand experiment but, Richert insisted, not a failure.

“Drop City was the biggest success of my life,” he said.

Hippie Modernism: The Struggle for Utopia