What sets the Loring Park Art Festival apart from other art fairs, Mary Anne Snedic Wunderlin said, is the park.

“You can’t get a more beautiful park than Loring Park,” said Snedic Wunderlin, a co-founder and longtime participant of the annual festival. 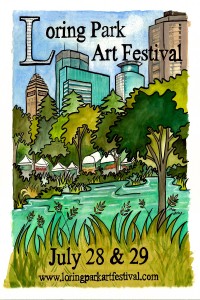 Now in its 19th year, the Loring Park Art Festival is set to return to the downtown Minneapolis park July 28–29. Despite nearly two decades under its belt, Director Pat Parnow said the festival remains a limited, juried showcase of just 140 artists, from ceramicists and jewelers to painters and printmakers, who offer their creations in a circle around the park’s central pond.’

“We keep it at that. (It’s) a nice trip around the pond,” Parnow said.

The festival, located near Oak Grove Street and Hennepin Avenue, still resembles how it looked in its inaugural year back in 1999. Back then, co-founders and artists Parnow, Snedic Wunderlin and Carol Rahr Haubner started the event with one mantra on their mind: “Artists, by artists.”

“We’re artists and we’re going to create this for the artists,” said Snedic Wunderlin, who creates wooden architectural renderings through a process called wood assemblage, “and we want the artists to come from near and far.”

Several of the event’s artists, which come from as many as 20 states, say the organizers are a key reason why they continue to come back year after year.

“I never get nervous or anxious in the days before it, since I ‘know the drill’ and am certain that everything has been taken care of by the great organizers,” Christy Johnson, an illustrator whose participated in the festival for five years, said in an email.

Loring Park is a draw for others. The large green space is close to downtown and landmarks like the Basilica of Saint Mary and Saint Mark’s Episcopal Cathedral, which regularly chime. It’s a particular detail of the setting that Anne Hoffman, who has been at the festival since 2001, said she loves. She makes her own copper wind chimes and stained-glass bird feeders.

“The pond has nice paths for strolling and benches for relaxing and people-watching. Visitors enjoy walking around the pond to take in all the art and to chat with the artists,” she said in an email.

There’s more than art at the festival. Both days of the festival will be packed with performances and activities with the Apollo Male Chorus, the Minnesota Mandolin Orchestra and Molly Van Avery, a poet who will be writing custom poems as part of a Springboard for the Arts mobile art project, among many others.

This is the first year the festival will have a beer garden, which will offer brews from the Lakes & Legends Brewery Co., a craft brewery based in the neighborhood’s LPM Apartments. Vendors at the food court include Northeast’s Anchor Fish & Chips, new vegan food truck Reverie Mobile Kitchen, Burnsville’s Rollin Nolen’s BBQ and St. Paul-based True Stone Coffee Roasters.

Each year, the Loring Park Art Festival features a different artist who produces a postcard, poster and T-shirt design. This year, local artist Meg Erke, a painter and book artist, is behind the design.

A complete list of participating artists and vendors is available at loringparkartfestival.com.