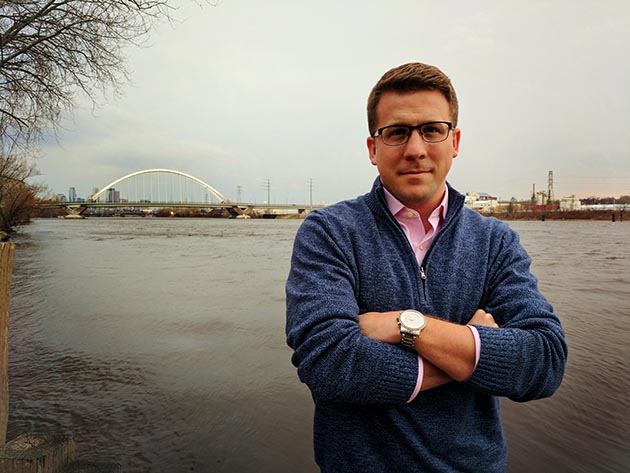 John Hayden is an independent challenging Kevin Reich in Ward 1

The latest candidate to enter the Ward 1 City Council race is betting that his part of Northeast Minneapolis wants to hear an independent voice speaking for them at City Hall.

Independent doesn’t mean under-the-radar Republican, although John Hayden said people often assume that’s the case when they learn he’s running without party affiliation. In a recent interview, Hayden argued the DFL’s grip on the City Council “hasn’t served us well, if you look at the outcomes,” pointing specifically to the city’s stubborn racial disparities.

A Michigan native who has lived in Minneapolis for about two years, he aims to take on his top priorities — including adding supports for school-age children, increasing access affordable housing and watchdogging the city budget — from outside the party system. While city elections are nonpartisan, 12 of 13 current members are DFLers.

“It shakes up our democracy a little bit,” Hayden said. “It creates a competition of ideas and (adds) someone who isn’t necessarily married to a bigger, broader agenda but kind of takes issues as they come.”

An example of Hayden’s independence is his stance on setting a $15 citywide minimum wage — a surprisingly salient issue in the campaign, given that the question likely will be settled before Election Day. While a majority of Council incumbents — and a slew of challengers from the left — now appear to support the move, Hayden would pick a lower target — $13 an hour, phased-in over 5 years — and pair the wage hike with cuts to business taxes and fees.

Marriage brought the 29-year-old Hayden to Minnesota. He and his wife, Jackie, live with their 3-year-old son in Windom Park.

Hayden is the national training lead for Genesys Works, a nonprofit based in Houston, Texas, that uses internships and skills training to guide low-income high school students into college and careers. He also serves on the board of No Labels Minnesota, a bipartisan organization that encourages unity, accountability and civil discourse in politics.

“I think making government work is the most we can do for social justice,” he said. “If our government’s broken, it doesn’t matter how progressive you are … because your government can’t actually go through those steps.”

Hayden is joining a Ward 1 race that includes the incumbent, Kevin Reich, and a challenger from within Reich’s DFL party, Jillia Pessenda. A third DFLer, Zachary Wefel, dropped out after garnering the lowest amount of support at the April ward convention. The convention ended with no endorsement after neither Reich nor Pessenda was able to win over 60 percent of the delegates.

Through his involvement with No Labels Minnesota, Hayden connected with former three-term City Council member and fellow Northeaster Paul Ostrow, whom he called a “political mentor.” The two wrote a Star Tribune commentary in February that was critical of the city’s role in U.S. Bank Stadium deal, which they argued lacked transparency and continued to cost city taxpayers more than promised.

Hayden called for a more detailed and transparent accounting of how the city uses its sales tax revenues, a portion of which go toward stadium operations. He would redirect some of those revenues into the city’s arts and cultural districts, including the Northeast Minneapolis Arts District, which he described as an “economic engine” for the city.

Hayden said the City Council has a key role to play in improving student outcomes by creating a “stable environment” outside the classroom, a formula that includes access to transit and affordable housing and “living-wage jobs for the people supporting these kids.” To increase those investments, he’d redirect city spending away from the stadium, seek to decertify the tax district created in 2013 to fund construction of a Nicollet Avenue streetcar line and search for other opportunities in the budget.

“I don’t want to rag on the parks or anything, but we spend more on parks than any city in the country, and they are semi-independent,” he said. “So, we need to think about how we are using our money with them, as well.”