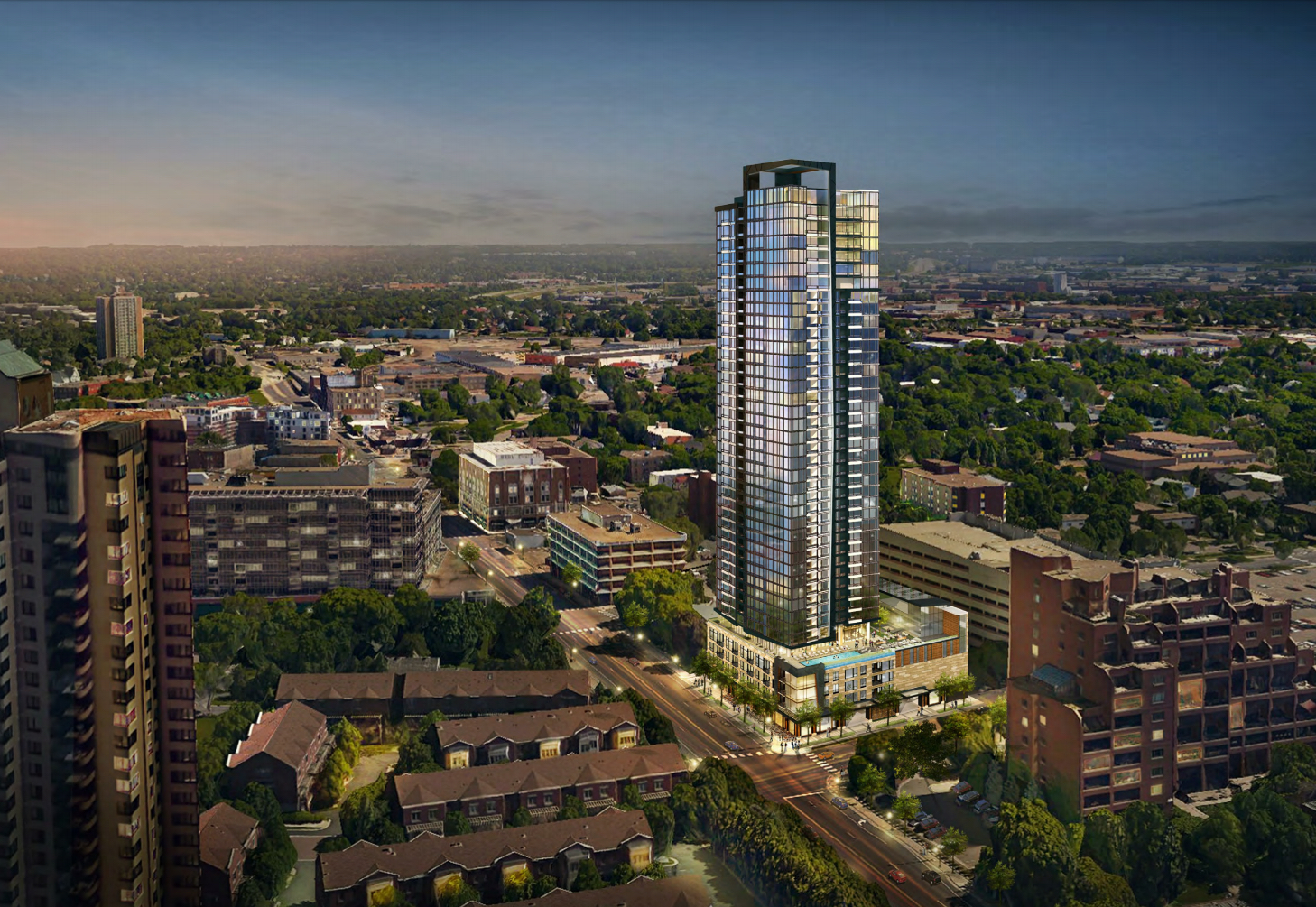 Alatus’ proposal for a 40-story condominium tower in the Marcy-Holmes neighborhood has survived nearly two years of challenges in court.

The Minnesota Supreme Court denied a neighborhood group’s petition in early August, clearing the way for the Minneapolis-based developer’s project to move forward after more than 20 months in legal limbo and four years since Alatus first shared preliminary ideas for the building.

The 214-unit luxury residential tower, temporarily referred to as 200 Central for its address, will rise at 2nd & Central, a site Alatus bought in 2015 for $3 million.

Director of Development Chris Osmundson said Alatus plans to break ground in the first half of 2019. The developer will announce the building’s name Oct. 4.

The developer estimates prices at the units starting at $375,000. Penthouse units had been quoted at more than $2 million.

The glass tower, to be built atop a four-story limestone podium, will have ground-floor retail and restaurant spaces and underground parking for residents. Alatus is proposing resident amenities like a pool deck, fitness center, wine and bike storage and pet amenities. Some penthouse units will have their own small private pools.

Principal Bob Lux said they used the time to tour condo projects throughout the continent and to refine the tower’s proposed layouts and finishes.

“The quality of homes and lifestyle that 200 Central offers will be beyond anything in this market or region,” he said in a statement.

Osmundson said they’ve been working on integrating transit services into the site planning, as well as tinkering with the layout of the commercial spaces to further add to the neighborhood.

“What we have been working to refine as a team is the interior programming of the building and how community amenity spaces will be positioned in order to be intimate but appropriately sized and give residents an experience that doesn’t exist in the Midwest as of yet,” he said in an email.

In 2016, the city’s Heritage Preservation Commission denied Alatus a certificate of appropriateness to build the tower due to its height, but a City Council committee overturned the decision.

The group that filed the petition was Neighbors for East Bank Livability, which describes itself as a coalition of residents from the Nicollet Island-East Bank and Marcy-Holmes neighborhoods. Citing St. Anthony Falls Historic District guidelines and the zoning code, the group has brought two tracks of litigation regarding the project’s scale and its relation to the area and nearby historic properties.

Erich Wunderlich, a representative from the group who also serves on the Marcy-Holmes Neighborhood Association board, said they also saw a brick building that once housed the St. Anthony Commercial Club on the site as a contributing resource to the historic district. The Heritage Preservation Commission disagreed.

“That was a very unfortunate loss, to lose that structure,” he said.

The Marcy-Holmes Neighborhood Association’s membership previously voted to support the project. Alatus said it already has the necessary approvals from the City of Minneapolis to move forward and submit construction documents.

Rather than argue about details like height and parking, which determine a project’s financial viability, Simons said neighborhood groups will be better served by offering constructive feedback to improve proposals.

“If we don’t complain constantly about the market factor issues, then you can start making a project look like what you want to see,” he said.

The 200 Central building would hardly be the only large residential project being built in the area, but so far it is the tallest.

Doran Cos. and CSM Corp. are constructing The Expo, a 25-story apartment complex, on the neighboring block. The 26-story Rafter high-rise, this time an apartment building from Mortenson, is rising a few blocks away at 333 Hennepin Ave. E. in the Nicollet Island-East Bank neighborhood.

The 200 Central project is similar in scope to the developer’s 41-story condo tower across the river, The Carlyle, which is among the state’s tallest residential buildings.

The new Alatus project is among several large-scale projects bringing condos to the city’s urban core, which, thanks to the Great Recession, didn’t see much new supply until the past few years.

Ryan Cos. and local developer Luigi Bernardi have proposed the 39-story Eleven high-rise with 101 condominiums for the other side of the downtown Minneapolis riverfront. On the same block, Shamrock Development is adding 374 condos to the eastern corner of Downtown East with The Legacy.