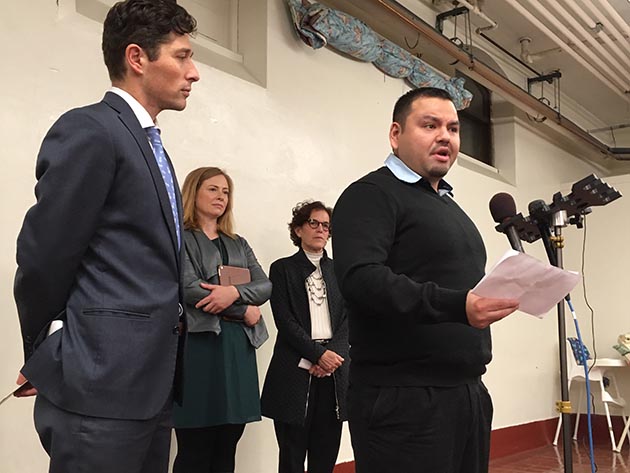 Minneapolis police vehicles will soon carry placards explaining the rights immigrants have if they are taken to jail.

Mayor Jacob Frey unveiled the small cards, written in both English and Spanish, at an Oct. 10 event held at Incarnation Catholic Church, a century-old Kingfield congregation that has in recent decades welcomed an influx of immigrant parishioners, many from Latin America and South America.

“Our immigrant community is a huge part of what makes Minneapolis an amazing city. And as mayor, I have an obligation to do everything I can to make sure their talents and their contributions stay right here in Minneapolis,” said Frey, who first announced plans for the placards during his State of the City address in May.

The text on the cards, drafted by the city attorney’s office, informs those detained by police of their right not to answer questions about their birth country, immigration status or U.S. citizenship status. Dubbed “Know-Your-ICE-Rights” placards, the cards also note that those taken to jail may choose to say nothing at all and can decline to speak with Immigration and Customs Enforcement officials.

Lt. Bob Kroll, head of the Minneapolis police officers union, said the department rank and file are “totally against” the initiative.

“Our job is to enforce the laws, and it starts with the term ‘illegal,’” Kroll said. “We’re all for immigration, but if people are here illegally they aren’t subject to our rights.”

But as the American Civil Liberties Union of Minnesota notes, many of the basic rights guaranteed by the Constitution apply to any person in the United States, documented or not. And under Minneapolis ordinance, the city’s police officers are not allowed to ask the people they encounter about immigration status.

Frey and Kroll last clashed over the issue in August, when Kroll and five other officers appeared in uniform in a campaign mailer supporting Tim Pawlenty, then a Republican candidate for governor, which Frey said went against department policy. The mailer included a claim that the state was “wasting millions on benefits for those here illegally” and Pawlenty’s pledge to “enforce our laws.”

Frey fired back in a statement, writing that the city’s “separation ordinance will be enforced no matter who occupies the office of Governor or who is leading the police union.”

Kroll said officers would “do as directed” and post the placards in their vehicles.

“We don’t have to agree with a lot of things, but we do have to comply with what we’re told to do,” he said.

Frey said the placards would boost public safety and police-community relations by assuring immigrants they can cooperate with police regardless of their immigration status. He said deportations, sometimes to countries the immigrants barely know, can be “devastating” to families.

ICE agents routinely pick up undocumented immigrants as they are released from the Hennepin County Jail. Advocates for immigrants have criticized Sheriff Rick Stanek for cooperating too closely with ICE, but the sheriff has said he is required under state law to ask inmates about their birth country and that the information is not shared directly with ICE but instead is routed through state and federal agencies.

Stanek, who is seeking re-election, is facing a challenge from Dave “Hutch” Hutchinson, a Metro Transit Police Department sergeant. On his campaign website, Hutchinson pledges to “rethink” the relationship between the sheriff’s department and ICE if elected.