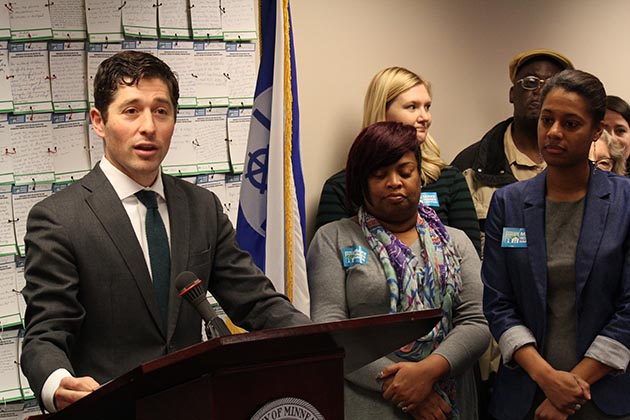 The budget directs $40 million toward addressing the city’s affordable housing crisis, an amount Mayor Jacob Frey said was triple the previous record, including more than $21 million for the city’s Affordable Housing Trust Fund. The budget also funds new supports for renters, including a pilot program that aims to get more renters facing eviction legal representation in housing court, and adds dollars to a revolving-loan fund used to rehabilitate rental properties.

Frey, who signed the budget Thursday in a City Hall conference room packed with housing advocates from the Make Homes Happen coalition, said Minneapolis was “poised to lead the nation in housing support.”

“It was your advocacy, it was your hard work during this budget process that made today possible,” he said to the coalition members.

While City Council members largely backed Frey’s ambitious plans for housing in the budget, the majority diverged from Frey’s plans for public safety. Led by council members Steve Fletcher (Ward 3) and Phillipe Cunningham (Ward 4), the council shifted about $1 million from Frey’s proposed budget that had been intended to replace sworn Minneapolis police officers with civilians in some non-policing roles, freeing-up those officers to work on the street.

The amendments offered by Fletcher and Cunningham redirected some of those funds toward a program that pairs trained mental health specialists with officers on calls that involve a mental health crisis, allowing the program to expand citywide from just a few precincts. Another portion of those funds will be used to set up an Office of Violence Prevention in the city’s Health Department.

Even with the shift, the police department will see an overall budget increase in 2019. The City Council supported Frey’s $370,000 plan to expand the anti-gang Group Violence Intervention program to South Minneapolis neighborhoods. The approved budget also includes $180,000 for an officer wellness program.

Frey said the shifts would not hurt the Minneapolis Police Department, adding that the budget process worked as intended and that “disagreements in municipal politics are inevitable.”

The approved budget is roughly 10 percent larger than the $1.41 billion 2018 city budget, an overall increase of about $140 million. It comes with a nearly 5.7 percent, or roughly $18.7 million, recommended increase in the city’s property tax levy.

The 2019 budget is expected to increase property taxes about 6.7 percent on a home at the city’s median value, currently $249,000. That translates to a $92 increase on the property tax bill.